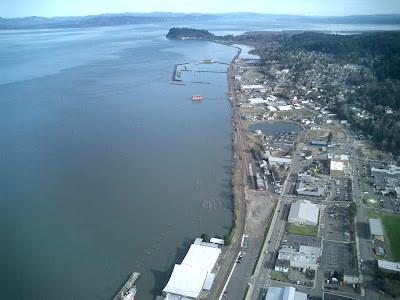 Here's one more aerial photo taken by Frank Wolfe and sent to us by Branden Wilson. It gives a remarkably clear view of the lay of the land and water on the east end of town, including a number of the landmarks I've already included in various Astoria, Oregon, Daily Photo pictures as well as many still to come.

As I said, we're looking eastward, upriver. The hills are all in Washington, while the foreground is in Oregon. The white roof at the bottom of the photo is the Maritime Museum. The lump of land sticking way out on the far peninsula is Tongue Point, visible in a number of photos, including this one taken at the Maritime Museum showing the lightship Columbia, which is half visible at the very bottom of the photo.

The first structure towards the viewer from Tongue Point is Pier 39, just at the top of the double basins made from jetties that create East Mooring Basin. Pier 39 appeared in a number of posts: Pier 39, the kayak place, and Bumblebee Seafoods. Showing East Mooring Basin itself are several other posts, including this pink sunset with fishing boats, my sea lion post, and this photo from last May.
Moving closer again to the viewer, the big red building sticks out into the water all on its own. Here's a photo of it from July. The River Walk runs the entire length of the river's shore here (and much further "down"). In fact, most of the downtown area is below the bottom of this picture. In the middle of the long stretch of River Walk, you see a round pool in the land area. This is called Mill Pond, and I don't have any photos yet. It connects to the Columbia River via a very short waterway, and in the past it was actually the pond for a large lumber mill. Now there are new houses surrounding the pond, and some are built on stilts over the pond's edge. The water birds enjoy the pond, and I'll try and take some interesting photos before long.
Posted by tapirgal at 2:02 PM

Thank you for this. It puts so many things into perspective, and I can see how the many places you've shown and talked about in the past interconnect.

I'm just in awe of that river! What an incredible body of water.

You do live in a glorious place. No wonder you always have a smile on your face!

I was proud of myself, reading this post, that I had no need to follow most of the links because I remembered them quite well. To say that I am now quite familiar with this area may be an exaggeration, but something close...
Please try to get more of these photos, and thanks these guys for us.
Excellent image, great post.

Nice post Sheryl. I'd wager money that most people don't have any idea of the size of the Columbia River. Also, it gives people an idea of how much of Astoria is (or isn't) flat, and how much is on an incline. Nice photo and even nicer post.

I enjoyed this photo a lot. I had fun figuring out various spots from their location and rooftops.

This is a nice view. A much improved and 3D version of Google earth :-) Nice shot!

I really like overhead photos or from a plane or whereever. I wish I could pop up in the air I just know I could get some spectacular photos. LOL
Thanks for the pic and all the info. MB

Thank you Mr Wolfe for showing us such a fantastic "Astoria from above". And thank you Mrs T. for guiding us around some of the places we've already seen from the ground!

It's unusual to see so few fishing boats at the East Mooring Basin and no ships waiting to head upriver.