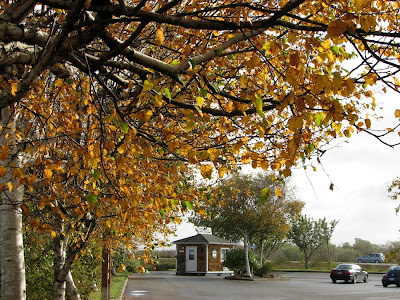 The trees are well into their "turning" phase, although many are still green. We don't usually get the freezing temperatures here that are found further inland, and our colors are slower to brighten. However, we've had so much wind and downpouring rain that many trees are becoming bare when they've scarcely shown their autumn glory. It rained hard again last night, and you can see a few small puddles in the parking lot.

I took this photo during a brief "sun break" (those few moments of sunshine on our typical overcast days) just across Young's Bay in Warrenton. I had never heard of a "sun break" until I moved to the Pacific Northwest (PNW). I rarely see any cars at this coffee kiosk, but they must get enough traffic during peak hours to keep them going. Not visible from this angle, a huge sign on the top says, simply, "ESPRESSO." Astoria has some wonderfully unique coffee places, and I'll try to feature them this season.

Drive-up kiosks for designer coffee was also a new concept for me when I moved here in 2001. I don't know when they began in the PNW (although I believe this is their genesis), but I'd seen my first one in Clifton, Western Colorado, in 2001 before moving here. I never saw anyone buying coffee from it, and I thought it was just someone's crazy idea for a business that was going to fail. Granted, I didn't usually pass buy during rush hour. Imagine my surprise when I moved to the PNW and found that these coffee stands breed like rabbits and people use them in droves. You can order custom blends and sizes with an astounding array of words I'd never heard or associated together until I came here.

I realize the trend is no longer local. Does your town or city offer drive-through designer coffee? What's your poison?
Posted by tapirgal at 1:27 PM

I amazed at how the world use a simple thing like pizza or coffee (coffee in Italy is an espresso) complicating them beyond sanity. In any Italian bar you could get at most three or four coffee drinks and most of them (cappuccino, macchiato) are strictly for the morning or breakfast.
The same for pizza, you could get a dozen types at most, but people usually order the three/four classical: Margherita, Napoletana, Romana, Quattro Formaggi, nothing more...
I have heard people ordering coffee drinks with fantasy names, taking minutes to clarify all the ingredients... These people express (pun intended) themselves with what they drink!
Please forgive this Italian cri de coeur...

I've heard that all good coffee begins in the Pacific Northwest but I'm not sure that it's true... if it is, it's probably 'cause of the Scandihoovians! ;-)

I'm a weak coffee drinker. Wait, I should say I like relatively weak coffee and stuff like these places put out knock off my socks.

I can't live without my 16 oz. single shot, non fat no whip mocha.
Anytime anywhere! Excellent subject for a post.

Sheryl...I live here also, and until I moved here in 2004, I'd never heard the term "sun break" either, but think I had it in my blood, cause my family is from here and I immediately knew what it meant LOL.

I love my coffee, but don't frequent the kiosks...I make a point of buying beans from Columbia River Coffee Roasters or other locals to grind every day fresh at the office.

I do love mochas. I try to limit myself to buying one every few weeks or so. Not only are they expensive, but I don't get tired of them that way. Great fall colors here Sheryl. Nice photo.

Espresso stands sure did start out this way. Seattle I think. Been around for almost ever now. Used to be a gas station on every corner now it an espresso stand on more than every corner. . I seldom stop anymore--coffeed out I guess. But one of the drinks I used to get was a 12oz Vanilla Latte. MB

I agree with VP! I was also amazed that most Americans think pizza is... American.
Your photo is interesting because we don't have places like these though I have noticed them in North America. As in Italy, we have cafés! But... I don't like coffee, so my poison would be very American. I'll let you guess.