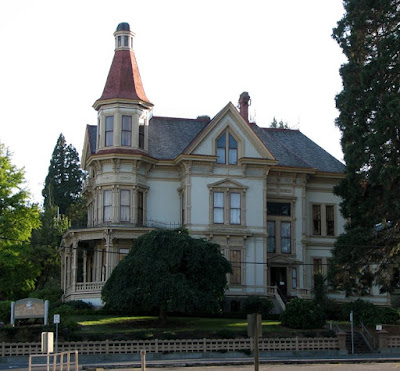 This home, built by Captain George Flavel in 1885, is one of Astoria's most highly touted landmarks. The Victorian masterpiece in the Queen Anne style sits at the corner of Eighth Street and Duane, across the street from the old county jail (used in the "Goonies" move) and the courthouse. And speaking of corner cupolas as I have been in the last couple of posts - this house has a "rather nice" one. Anything but abandoned, this house is a jewel of the Clatsop County Historical Society, and you can purchase a tour (see my tour in photos below). There is a lot of history one could give about Captain Flavel and his house, but I'm just going to leave you with a few relevant links. I'm sure we'll see the house again, and maybe sometime I can capture it in lighting other than this shivery shadow. I took the photo on Sunday, October 4. It's rare during warmer seasons to find the place unobscured by parked cars.

I wanted to share another comment by Mom of Three on yesterday's post: "Which begs the question: Top 10 Uninhabited Astoria Buildings that you'd like to break into--not for harm, just for a tour. Now that the Flavels are both in Portland care homes, what I would give to skulk around that house on 15th. I wouldn't steal a thing, either, just look and look and look. And the place on 17th. Which others??"

Mom. We'll have to talk about this. Send me e-mail, photos if you'd like to have them used as a guest photographer, or links to any of the houses you like if you've got them on your blog. You can find me at oregontapir at yahoo.com. Thanks for your contributions so far :)

. A tour inside from my personal blog, 2001 (old camera)
. Facade with June flowers, 2008
. From my Picasa album, various years (incomplete)
. On Waymarking.com
. Astoria, Oregon - Places by Robert D. West (scroll down to #5)
. Wikipedia
. Found on Flickr

Hi !! This is a beautiful post !! Location and shot both are amazing ! Thanks for sharing...Unseen Rajasthan

Wow, another beauty. I'm going to have to stop in Astoria!

Another magnificent Astoria architectural artifact. It looks huge. What fun it would be to explore...

And I like this photo a lot because there's no glare or dark shadows and burned out highlights as so often happens on a bright sunny day...

Have a great week, Sheryl!

Thanks for showing one of the gems of Astoria. I know how hard it must have been to get a good shot.

What a magnificent house. Look at that wrap around porch. Thanks for the link to the inside photos Sheryl. Great photos.

Love your whole series on older houses. Love the domes, cupolas and gingerbread archetecture. they are many of the same houses out this way. Not in Stanwood but in Everett and Bellingham.

I have a picture of the Museum with the boat in the front window. I always visit the Museum. I understand you live closeby. Yes? MB