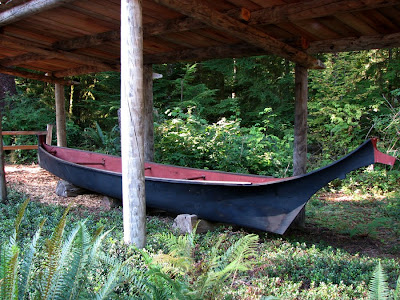 The two canoes in this post are on display at Fort Clatsop, just outside of Astoria. The top photo is the canoe on display outside the fort's museum, and is a typical ocean-going Chinook Indian canoe. They were made in several sizes to carry various numbers of people. The ocean-going canoes were often used for hunting seals. This canoe is the same style as the burial canoe replica seen in my earlier post. You can also read about Chinook canoes on this interesting site. 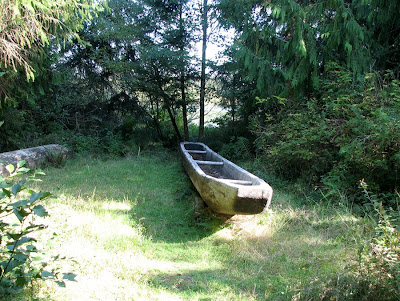 From the site linked above, I learned that this canoe is for use on rivers, also called "sweet water." It rests near the end of the trail that leads to the canoe landing used by Lewis and Clark.
For more pictures of Fort Clatsop and the trail in the woods, see this post with photos I took in 2001.
Posted by tapirgal at 8:33 AM

The differences between the two styles are evident. Good examples Sheryl. I'm going to have to take your link and check out the photos of Fort Clatsop.

That's a great post, very interesting. I know the Makah whale hunted and are trying to start again, don't/didn't the Chinook do it?

Thanks for all the information Sheryl. :-)

From what I've seen of your river and your sea, I wouldn't get out either in either one of these canoes!

But I guess the natives learned very young how to handle them and themselves...

By the by, I dedicated today's Cedar Key post to you!

I agree with Jacob, seen the kind of vessels I'll better try my fortune inland.