Rain, River, Replica and Rituals on a Watery Outdoor Wednesday 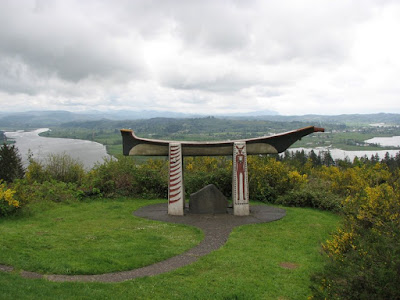 Today I thought we'd look down the other side of Coxcomb Hill toward Youngs River, which hems the south side of Astoria. (See yesterday's post for the view from the Columbia River side of the hill.) Youngs River flows from left to right, entering the Columbia at the new Youngs Bay Bridge. Located only a few yards from the Astoria Column, the canoe is a 1961 cement replica of a Chinook Indian burial canoe. The people who placed it here certainly chose a lovely and reflective setting for it. The two decorated posts on this side are clearly visible. Directly behind them are two posts with plaques on the insides. One plaque says, "Indian Burial Canoe. Symbolic memorial dedicated by Comcomly's descendants April 12, 1961 Astoria's 150th anniversary. Honored guest was Lord Astor of England, descendant and namesake of the city's founder." The second plaque says, "Comcomly, c. 1765-1830. Great chief of the Chinook Nation, known to Lewis and Clark, respected by the founding Astorians, the Northwesters, and the Hudson's Bay fur traders." Although the honored chief is usually referred to as Comcomly, it seems he is more correctly named Chief Coboway.

In her 2008 book, Astoria: An Oregon History, local author Karen L. Leedom notes, "The [North Coast] Indians were superb canoe builders, creating 40-foot vessels hollowed out of single logs that they expertly maneuvered through the tricky waters of the Columbia." She also tells us, "When a high-ranking Chinook Indian died, his slaves were put to death and buried under the posts of his raised burial canoe."

It seems history always gives us something to think about, doesn't it? Today I walked up to the Heritage Museum and met Liisa, the museum's historian. I wanted to introduce myself, because I figure I'll be using their resources fairly often from here on out. The more I translate what I'm seeing into words, the more I want to know. And after talking with Liisa today, I have a hugely-expanded sense of what that could be like.

Wow! It's so nice and cool. We have a friend who came from Oregon. Now I can picture what the place look like. Thanks for sharing.
Here's my link:
http://sarahg26.blogspot.com/2009/05/watery-wednesday-5.html

What an unuaual view! Love the background behind the sculpture. I always enjoy learning stories like this!

That is a very impressive view, great shot!... thanks for sharing.

What an interesting story! Impressive monument and view!

Thanks for sharing the information about the canoe. I am amazed how rich you make each experience by your description.XXOO

What an interesting account of Indian history with the canoe. Nice shot of one, too. Thanks for sharing this with us.

You've captured a wonderful vista, but it was a delight to read your commentary! Thanks so much for the historical perspective. Yes, there's almost much more to know.

I love clicking on your blog, cause I usually know exactly where it was taken before reading your story!!! Great shot!

a lovely site to display something as meaningful as this. great R post!

What an interesting post. The view you captured is incredible. Have a wonderful day.

Lovely and informative post! Wow and what a view.

Welcome to Outdoor Wednesday! A gorgeous shot... beautiful! Thanks for sharing your photo.~ Susan

What a gorgeous place. Thanks for sharing!

That is the chicken said...

What a beautiful canoe...and fascinating information about the First Nations in your area. Have you ever visited the museum of anthropology at UBC in Vancouver. they have some amazing stuff there.