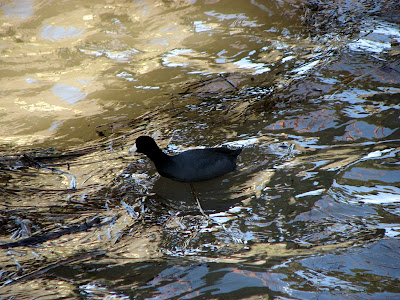 Although I took this photo last January, I wanted to use it today. This common bird seems to glide in a watery world as if in a silent dream. Enlarge the photo and see what I mean. When I grew up with these birds in Southern California, we called them mudhens, and they could be found on almost any body of fresh water. They are more properly called coots, and in North America, they are northern coots. It was a muddy day on the river due to sediment from a recent storm. The storm also left the river's edge awash in broken plant material, which you can see in the glassy surface of the swells. The coot is in the shadows, but the sun on the muddy water makes it appear golden and dreamlike in this lucky afternoon photo on the Columbia River. Shattered reflections of red are from the radio tower high above.
What is your favorite thing to photograph on water?
. Watery Wednesday
Posted by tapirgal at 5:00 AM

Probably reflections or birds/fish/animals.
Nice picture...looks like he's headed into the sun.

Nice shot. There are a lot of coots up at the lake by me and it's funny, there are more of them there than any of the other lakes or reservoirs that I also visit.

My favorite thing to shoot on water is the white egret because the blue of the water seems to enhance the beauty of it's white feathers. To me they are poetry in water and I never tire of taking their photos.

This Coot does seem to be gliding along. Just lovely.
My favorite thing to capture on water is a great reflection!

Lovely photo of the coot! And wonderful colors of the moving water!

There is a lake in Oslo (not the one I have on WW today) where the Coot is the mascot of the water! The water is protected, so no fishing, no baths, no picking flowers are allowed. The reason is there is so many protected animals coming there - so that is a great place to visit!

My favourite water shoot? I have to say reflections! I never know what the photo will look like before I come home!

Thanks for stopping by! :)

Great photo...love the play of light and shadows!

I love this shot. I should try to stop in here more often... I always find some great stuff here when I do.