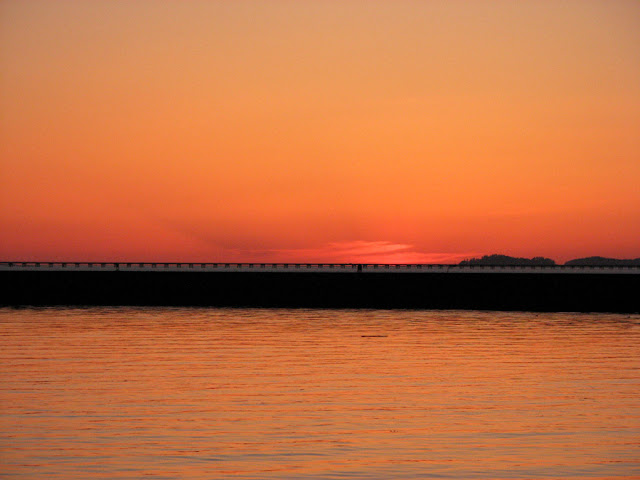 I took this photo from the pier at the East Mooring Basin about 8:30 on April 30th. Color blazed across the sky and the water as if wiped there with a painter's rag. It was so rich, so even except for the zig-zag of bright red above the bridge and the breakwater. The thin blue-gray stripe is the Columbia River, the wide dark band is the breakwater, and the orange foreground is the water in the East Mooring Basin. The river was nearly flat; the evening felt gentle and almost warm compared to what it's been. There were more people than I'd have expected gathered on the pier, but not enough that I knew anything was wrong. On a night like this, there might be one or two, but that night there were a dozen. The day after I took the photo, I learned the reason why. An hour before I'd arrived, the body of a man had been found there in his 60-foot sloop by his mother, who had worried about his state of mind. He'd come from Portland, and there in the harbor he'd shot and killed himself. So sad. By the time I arrived, there was really nothing there to indicate this drama, but now, looking back, it seemed almost as if the evening had put on a tenderly brilliant cloak to see the poor guy out.

this too will pass said...

what a story with this photo! Great colors..