What is Astoria without its column? What is Oregon without Scotch broom? 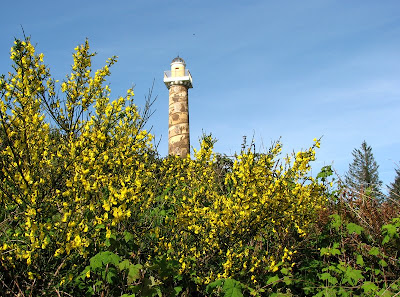 One of Astoria's most prominent and prized landmarks is the 125-foot-tall Astoria Column perched at the top of Coxcomb Hill. You can tell how popular it is because if you go to Astoria on Google Earth, this location is where you'll find most of the photos congregated.

You can see half or less of the column in this photo, since I've taken the shot from behind and below a patch of yellow Scotch broom. Some of the photos on Google Earth show the column itself, with its spiral mural of the region's history, and some show the spectacular views from the top of the hill 600 feet above two rivers and the sea. You can see for miles to the Columbia River on the north, including the bridge, the ships, and the mouth of the great river. To the south you can see the wide, meandering and spreading Youngs River and the hills beyond. Both views are remarkable. The tiny dark spot just above the tower in the photo and just to the right may be a bald eagle. They like to roost in the tall firs here. Down three sides of the mountain is the town of Astoria and to the east along the ridge is a forest. I used to enjoy climbing to the top viewing platform of the column, and I had just started to think of using it for regular exercise in all weather, when the city closed it for repair of the metal staircase. That was several years ago, and it's still not open. Normally on a day like this you would have seen people standing on the top landing, which is also where you get the best view of the eagles.

The yellow flowers, which I adore, grow strong and healthy in the uncultivated and sunny parts of Astoria and the local coast, particularly along roadsides. I loved them when I first entered this county in June of 2001. They made me feel happy and welcome. Unfortunately, they are a noxious weed - an invasive species originally imported to stabilize road cuts. As I said on my other blog last year, "It's stunningly beautiful to look at, but alas, it does not belong here and overwhelms other species. It costs the state of Oregon a whopping $47 million each year in lost timber production plus a few more million for other problems caused by the plants. A student won an award for a process to turn it into biofuel." So far, I haven't seen any activity in our local area to eliminate the plants, although I may have missed it when it's happened. We live among hills that are logged, and that's another mixed bag - the beauty and ecological richness of the forest versus jobs, income for the local and state economies, and (I hate to bring this up, but I think about it often) don't most of us treasure wood in our lives? If you live where they clear-cut, you can't help thinking about where that wood comes from. You can't drive to Astoria from the east without seeing the results of cutting timber - the ugly stumps and barren hillsides. The patch of brown in the photo? I couldn't tell you why that plant is dying while the Scotch broom thrives. It could be a remnant from last year. We also have natural-growing ferns here, and many of them are coming back to life after a harder-than-usual winter.

What is the stand-out monument or emblem of your town? Does your location have a prominent invasive plant? Talk to me! I'd love to know!

For more photos about "yellow," "flowers" and "health," please visit:

. Mellow Yellow Monday
. Today's Flowers
. Moody Monday - Healthy (the Scotch broom and the discussion of what it means to the health of the environment; also, perhaps, use of the spiral stairs as a gym that could be used in any weather!)
Posted by tapirgal at 11:59 PM

I have never really explored Google Earth! This inspires me to do so! How fasinating... I only have invasive mint in my gardne! I never thought that I could consider such a gem of a plant a weed but it is EVERYWHERE and chokes my other plants if I don't get rid of it:)

You are such a gifted writer. Your description of the area is lucid and thought-provoking in such a gentle way.

Scotch Broom (Cytisus scoparius) has certaintly given all brooms a bad name. It thrives in the Pacific NW. Only introduced in the PNW in the early 20th century and look at it now.

I guess the closest landmark here in stanwood is the smokestack left from the Hamilton mill. It is decorated for holidays. Seattle, south of here has the famous Space Needle. So that might be the closest really famous landmark.

Nice photo. I agree, Scotch Broom is very invasive but the color is nice to see along the roadway.

Scotch Broom is considered a noxious plant , in New Zealand, where I'm originally from.

I was really surprised, when I moved to reno, nevada, to find that people planeted it in their gardens and shopping centers, etc used it as a landscaping plant. The dry desert climate, keeps it under control and it doesn't spread like it does in wetter climates.

Unfortunately, it appears that I'm really allergic to it ( something that was only mild in NZ), so this time of the year, while it is in bloom, is rather miserable for me.

It is a pretty flower though :-)

Thank you for visiting my blog! Its great to find you here on Daily Photo Blog. I love Astoria. We used to visit there a few times a month (my moms best friend lived there) when I was a kid, and its still my favorite place to visit near the coast. I will be sure to check in regularly!!!

So sorry the tower is closed. What impressive views must be accessible from its top. I'm not sure I'd be able to walk the stairs, though.

A beautiful one. Nice shot.

Martha at A Sense of Humor is Essential said...

Great post, great picture. Nonnative plants are a huge issue here in Southern California also.
Hmm, landmarks in my little burg include Hart Mansion, Vasquez Rocks, and of course the ticky tacky subdivision shown on the TV show We.eds.
Thank you for stopping by my blog.

Ooops, apologies on behalf of my ancestors for your invasion. I haven't heard it considered noxious here, but maybe that's because it's local. All that yellow can be too much of a good thing sometimes, tho.

Ahh.. the tower! Love that one. I'm in Philadelphia, we have lots of monuments. Not sure about invasive plants though.

Wonderful photo and very informative post. Thank you for sharing.