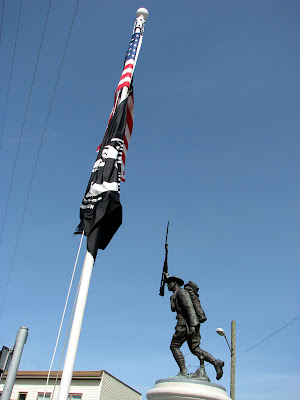 The Doughboy is one of only two free-standing statues I can think of in Astoria. Hopefully I'll find more as I become more aware of looking for them. He stands, rather unassumingly, on a pedestal on Marine Drive in Uniontown, the western part of Astoria. The pedestal has been re-painted, and the small circle of grass and bright flowers is carefully maintained. The practical denizens of Uniontown didn't waste any space with a mere pedestal, as there is a public restroom in the base, which is partially below ground level.
(See more of the Doughboy Monument)
My own practical concern while taking this photo is that there were so many wires and confusing backgrounds that I had only two angles that worked very well. I opted for this one with the flags and dramatic angle. When I lay on the grass beneath the statue for a different shot, I was able to eliminate all but one wire, but the sun was wrong for a good photo. In the end, I liked the flags. What felt extremely poignant to me was that when the statue was erected by the people of Asoria (funds mainly raised in Uniontown) on July 21, 1926, they had only one World War to commemorate. I suspect most could not conceive of what was to come. The inscription reads:
SOLDIERS MONUMENT
DEDICATED
TO SOLDIERS OF WORLD
WAR OF CLATSOP COUNTY
BY THE
CITY OF ASTORIA
JULY 21, 1926
A bench at the foot of the monument is also inscribed:
DOUGHBOY MONUMENT
ERECTED IN 1926 BY THE AMERICA LEGION
WITH FUNDS DONATED
BY THE CITIZENS OF WEST ASTORIA
ALSO KNOWN AS UNIONTOWN
REDEDICATED MAY 18, 1991
Beneath the American flag hangs the POW*MIA flag, which says, "YOU ARE NOT FORGOTTEN," and gives these sad statistics:
WORLD WAR I
3,350
WORLD WAR II
78,777
KOREA
8,172
VIETNAM
2,260
PERSIAN GULF
41
Again, I think of the people erecting this monument, hoping, praying, and expecting that it was truly the "War to End All Wars."
Beyond the obvious reflections one has about a monument such as this, I couldn't help thinking of the setting. Initially, it was probably fine and uncluttered; the statue stood against the blue or gray or cloudy or sunset sky as prominently and respectfully as the citizens of Uniontown could have wanted. But the location has succumbed to the blight of wires and light poles. It's too bad. And yet we do continue to have affection for this local monument and what he represents. I've posted some photos on my other blog that show the statue in situ.
I used this piece of Astoria's history to take part in the Statues theme on ShutterDay. Link on over there to see more statues! Click here for further info on the monument.
There are some extremely interesting quotations about war on this page by some extremely notable individuals. Thanks for sending the link, Lee.
Posted by tapirgal at 9:27 AM

Thanks for such a nice description of this statue, as well as the photo! Love your perspective here!

Wow, those stats are sad, especially WWII. God Bless our Servicemen and women. What a sacrifice.

Thanks for visiting San Diego!

What an excellent choice for a photo and such a fine, quiet matter-of-fact description about such a senseless brutal event. The optimism about ending war seems ironic but not surprising. Your post brought to mind the following: Only the dead have seen the end of war. ~Plato

A very under rated statue that is often overlooked in the beautiful city it lives in.

Our cruise ship was diverted from Mexico to Canada this last Memorial Day week, with a stop in Astoria for about six hours. Not nearly enough time to properly see the town, but we did pass this monument. It reminded me of my neighbor Burl L. Miller, a WWI veteran of the 26th Engineers, and next-door neighbor of ours in the 50's, when I was but a lad. He served in France in 1918, where he was gassed with mustard. I will NEVER forget him, one of the finest men who ever walked God's green Earth. He passed away in '61, and I still, to this day, have the hand-woven patch from his doughboy uniform. I treasure it, as well as his memory. God bless you, Red. Rest in glorious peace.