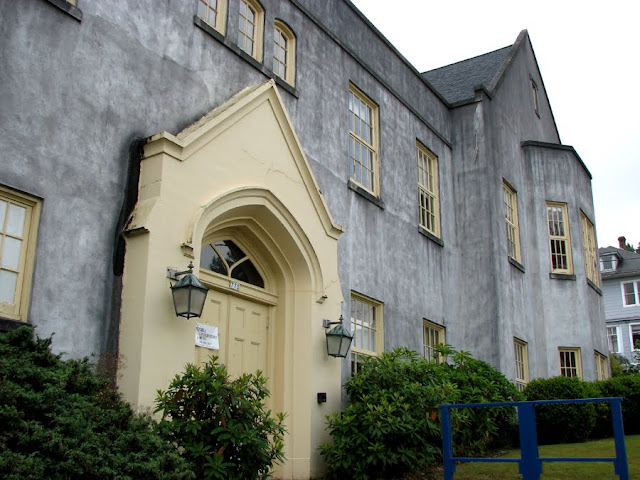 I've always found this building at the corner of 11th and Harrison to have an interesting and oddly charming facade. My imagination puts it on the English moors in a novel by one of the Brontë sisters. In looking up styles online, it seems to be Gothic Revival, which began in England and became popular in the United States. The sign on the door says, "Astoria Conservatory of Music," but I believe that the building began life as part of the First Presbyterian Church next door, which has more ornate elements of the Gothic Revival style. 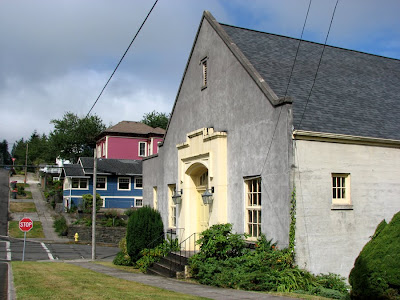 Here's the Harrison Street side of the building, which happened to be in sunlight for a few minutes yesterday morning.


This blog is sponsored by Tapir and Friends Animal Store.
Posted by tapirgal at 10:50 AM

I remember when Mother Hubbard Wonderland Band used the church to practice............> http://pnwbands.com/motherhubbard.html

Very unusual architecture so far as I'm concerned...and there's a certain vitality to it. But it looks like the doorway was pasted on as an after thought. ;-)

Where the heck is Sentinel Hill?

An interesting and very strange story.

I thought at first I was just going to comment that I never thought I'd like a gray concrete house, but that somehow this architecture plus the mellow yellow trim gave it some charm. But the later comments sure made this a very intriguing post!

I think I remember The Beach Boys practiced there and Sam The Sham And The Pharaohs practiced at Stars Of The Seas. They plugged their guitars into the Tesla Coil and it was so loud it broke windows in houses on Sentinel Hill.

Rex was real but I only "knew" his son who dressed quite as much as you would expect a Satan worshiper would dress along with his goatee...I heard that he took over for his father and eventually moved to San Francisco to take over the "business" or something. I'm sure others know more. We always used to hear rumors about rituals and sacrifices on the beach somewhere. (Never heard about a building.) But I'm relatively new (1979)