Yellow and blue for Jacob 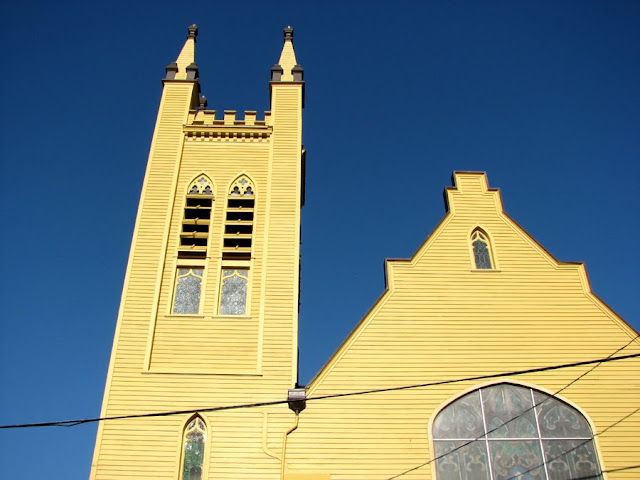 I'll give you the convoluted references in a moment, but this photo is to let Jacob know that we do have yellow and blue here in Astoria. The "house" is the house of God, actually the First Presbyterian Church at 11th Street and Franklin Avenue. All summer, they've been working on a new coat of paint, turning the slightly faded yellow into a beautiful, rich non-faded version of about the same color (more waterproof, as the old paint was due for replacement). The sky, of course, is blue, as it is in real life today. I wonder how much longer that will last here in the land of clouds and rain? Jacob, I may be breaking your "house rules" with the lack of blue on the building, but I suppose it's also possible they could play some kind of blues gospel inside the church. This is only conjecture, based on the fact that Astoria is home to many, many, many "mature" hippie types. This means that here at the end of the world, we may have some of the best darn live local blues music you're going to find anywhere outside of Chicago.


I digress horribly. Jacob was discussing "Swedish houses." Whether or not any Swedes attend this church I also could not tell you, but since so many Swedes were instrumental in founding Astoria, I have to think that the answer is "yes." But speaking of blue and yellow Swedish houses, Lee (Bend, Oregon, Daily Photo), tells me there were at one time quite a few yellow and blue houses in Astoria owned by Swedes. Fer real.
To understand the nonsense behind this post (should anyone care to), travel to Ocala, Florida (this post), and to yesterday's Astoria post, where you will have to read Jacob's comment in the Comments section. Brattcat also has a "Swedish house" on her blog.
And lest I forget, happy Skywatch Friday, everyone!
P.S. for Vogon Poet, today I was going to post pix of the inside of yesterday's house, but Jacob got me going. I'm sure you can understand that, and maybe tomorrow I'll show the inside :)
Posted by tapirgal at 9:48 AM

I love digressions and I had a lot of fun reading your post, with you trying to prove blue and yellow a church that was barely yellow! You did a great work with words...
I'll try to find something for Jacob here, but the task is desperate. Probably I'll have to buy some paint myself...
By the way, your picture of the church against the sky is beautiful.

This is sooo funny, Sheryl! Love the colors...and yes, that sky is certainly blue. Sometimes Swedes get a little blue, too.

I think I remember how the Swedish house started on Ocala DP, lol! It's a pretty church!

Ya gotta love this community.

There doesn't seem to be much blue on the building, but I guess there isn't much for houses painted with yellow and blue, I know I rarely see them...

What an incredible sky, and the yellow in front of it is wonderful. Hope Jacob likes it.

FYI, your link from the SWF site was incorrect. Please double check before you hit enter. I figured out the correct one and fixed it, but that is not always possible.

Thanks so much for sharing your wonderful sky with us!

Nice work. Glad you gave Jacob a chuckle. That's a beautiful photo. I'm pretty sure I saw blue and yellow in it.....yeah I'm sure.

Tapirgal: Maybe you should take a pix of Lindstrom's bakery downtown or send him some Swedish pastry.

@ Lee and Tapirgal: Ya, shure. I tank dat voud be a guud idea!