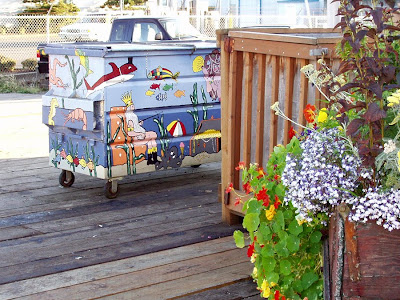 June 2002
One reason for snapping photos everywhere you go is to save images for the "memory book." We do this with photos of ourselves, our friends, our pets, and events. When I look back through my photos of Astoria, I often see things that have changed over the short nine years I've been here. This dumpster on the 6th Street Pier - whimsically painted by Diane Beeston - disappeared a number of years ago. This dumpster actually had a sentimental meaning for me, because when I planned to move to Astoria in 2001, it was one of my first glimpses of the town. When I decided to move here I had never been to Astoria. I did what research I could using travel books and the Internet, but there were many fewer photos online at that time, and one rare web site (gone now, I think) showed this dumpster (from the other side) and a seal poking its head out of the water. These were some of the strange pieces that helped determine my direction. A town with painted dumpsters and seals at the edge of town seemed welcoming.


This blog is sponsored by Tapir and Friends Animal Store.
Posted by tapirgal at 5:30 AM

Well, I hope the seals are still there!

I'd be attracted to a town that had dumpsters as cute as this one too! Quite a unique form of urban art, I'd say! Too bad it's gone... and I do wonder why it IS gone...? Maybe it just got too rusty over time?

Great idea! Wish all dumpsters would get a life! Too bad this one is now missing.

That's a wonderful way to make a dumpster more than just a trash can! It's too bad that it disappeared.

I'm fascinated by the fact you had never been to Astoria before deciding to move there. You must have done tons of research and had a really good feel for the place.

And it all worked out very well!

I know what you mean about changes. I've only been in Jackson for a little more than three years, but it's certainly changed. More shopping centers are going up, old ones have been abandonned. It is interesting to look back.

Sorry your dumpster is gone. It did look cute and welcoming!

Fantastic! I'm sorry I never got to see that. I once posted a photo of the multicolored water meters downtown, and my FB friends went crazy for it. I love those whimsical touches that make Astoria so cool.