Marine Layer on the River 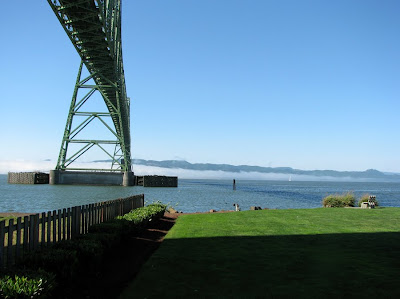 August 14, 2010
The patterns that occur where the river meets the ocean create their own weather. One reason Astoria, Oregon, never stays hot for very long is that the heat draws the marine layer from the ocean (left in this photo) inland and chills the air. 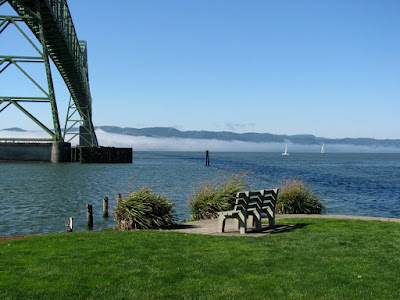 As I understand it, the marine layer is not actually the visible cloud, but the cloud is often held underneath the marine layer, which is an invisible pressure zone. Later in the afternoon of the Regatta Parade with its 90 degree temperature, I opened my door near the river and felt positively cold. As I drove past town and stopped at the riverfront park, I discovered a finger of fog reaching upriver, a clear indication that change is coming rather quickly. 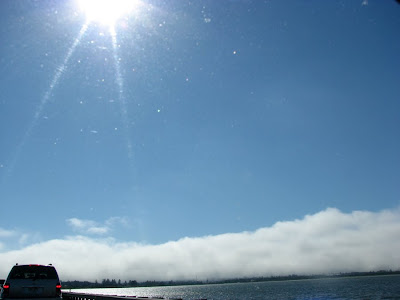 Crossing the Young's Bay Bridge to Warrenton a few minutes later, I could see the fog bank growing taller as it rolled in from the ocean. I wish I'd been able to take the next photo as the bank grew and darkened, but I thought I'd better keep both hands on the wheel, as traffic had begun to move. It was a mixed blessing. Who likes to sit in traffic, but then again, it was nice watching the atmosphere change.

This blog is sponsored by Tapir and Friends Animal Store.
Posted by tapirgal at 5:30 AM

Wow! That's a really interesting weather lesson. I had no idea. The fog does look really cool (hee) rolling in. I'd miss the warm weather though!

We could use a Marine Layer about now. Ridiculously hot but change is on the way tomorrow night.

One thing about camping on the Oregon coast (we used to go to Garibaldi every year) - no matter how hot it got during the day (rarely!), it was ALWAYS cold at night.

This is interesting and makes for some really beautiful pictures. Love that bench, I could sit there for days...