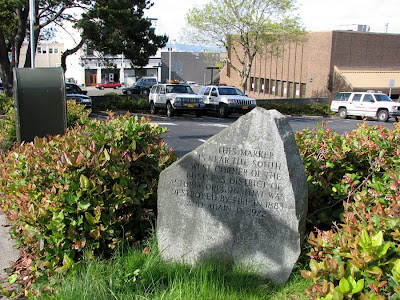 Some people separate sheep from goats. In Astoria, we separate Victorian from Deco. It's not because we like to segregate them, it's because two fires required the downtown to be rebuilt. This rock marks one of the corners of both fires. Behind me you will find a lot of Victorian architecture, and in front you will find mostly art deco, or in some cases just plain rectangular buildings.

THIS MARKER
IS NEAR THE SOUTH
WEST CORNER OF THE
BUSINESS DISTRICT OF
ASTORIA, OREGON, THAT WAS
DESTROYED BY FIRE IN 1883
AND AGAIN IN 1922 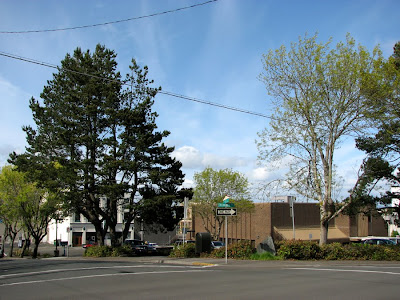 The rock sits just past the street sign in the middle of the photo. 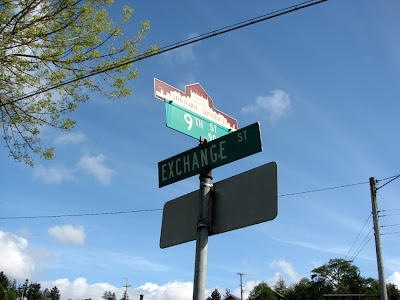 Here's the sign (at the corner of 9th and Exchange). If you follow Exchange for a few blocks, you'll come to another of the fire's landmarks, which I'll show another day. I read about it, but I don't think it has a marker like this corner has. 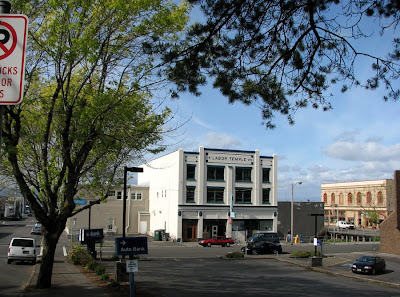 I took this photo of the Labor Temple a few paces down 9th Street toward the river. You can see clearly the deco influence in this building and the tan building on the right, which fronts on Commercial, the main street of downtown Astoria. Like many of the downtown buildings, the date, 1923, is stamped on the Labor Temple along with the building's name. Keeping up with the times, the Labor Temple Diner & Bar has its own page on Facebook. And here's an earthy review of the venerated landmark. I suppose "language or content warning" is appropriate on the second link, but I think it gives a true picture of what you'll find there, and it has a photo of the inside.
This blog is sponsored by Tapir and Friends Animal Store.
Posted by tapirgal at 8:35 AM

Fire is so devastating that it is reasonable to assume the city fathers wanted to ensure such tragedies would not recur...but for every action there's a reaction and mine is that perhaps some kind of compromise would have been in order...did it have to be either/or?

Loved the commentary on Let It Pour!

Let it pour is a phrase used on the "earthy review" site you cited! Heh, heh! Upper left corner.

Very interesting history ... I followed the earthy review link and the picture is worth the trip!

For a totally unrelated comment: I wonder how the Chinese separate sheep from goats when there is only one character for both? :-D