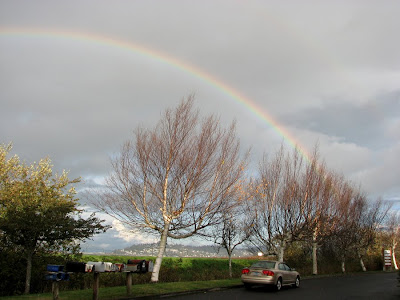 Warrenton, Oregon ~ November 11, 2009
I cross this bridge to get to the gym on the other side of Youngs Bay from Astoria, and on November 11th, just as I was about to go inside, a huge rainbow formed a perfect arc from horizon to horizon over the river (between my vantage point and the city of Astoria, seen on the hill behind the trees). With the buildings behind me, I couldn't step back and get the whole arc in the picture. It was glorious, as it had been raining hard. In fact, often the bridge gets harder rain than on either side of it. Don't ask me why, but it must have something to do with the river.

The mailboxes on the left appeared earlier in this blog, and this photo of Astoria was taken only a few feet away from today's photo, although it looks so different. This pic was also taken from near the spot, but facing to the right.
Posted by tapirgal at 12:30 AM

Excellent capture, Sheryl. I always am in awe of rainbows---just because, I guess. MB

The last time I saw a rainbow was in Québec, at the foot of a waterfall. This one is so beautiful, lucky you!

I never caught a rainbow in a good picture, so I'm a bit envious...