Drawbridge in the rain 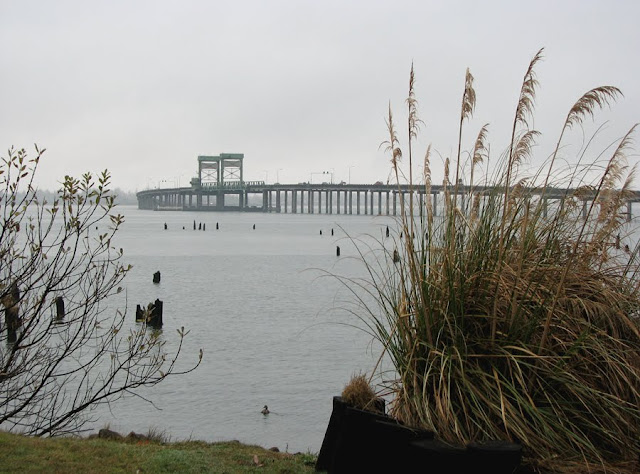 Here's the view of the Young's Bay Bridge (the new Young's Bay Bridge) from Smith Point. It crosses the mouth of Young's Bay (fed by Young's River and the Lewis and Clark River) right where the bay feeds into the Columbia River. This is a drawbridge, allowing the taller fishing boats to leave and enter the bay. It's the bridge most of us use to cross to Warrenton, Gearhart, Seaside, all Oregon points on the wedge of land that includes Fort Stevens and leads to South Jetty, and on down the coast. It's the way we get to the ocean. In my eight years here, I've only been caught in the traffic behind the raised bridge once or twice. It's fun to see the boats go through, especially if you're not in a hurry.

The other Young's Bay bridge (the old bridge) will get you there, but it ends on a slower road off the beaten path. These days, it's mostly used by people who live or work in that area. I posted a photo of its artistic design here.


An aerial photo by Frank Wolfe shows the New Young's Bay Bridge (left) and the Astoria-Megler bridge (right). The old Young's bay bridge is out of the photo on the left.
Posted by tapirgal at 8:51 AM

...."all Oregon points on the northern peninsula and on down the coast"

Didn't know Oregon had a nothern peninsula. What is the name of it?

That's a lovely composition the bridge framed like that.
Rising bridges are always impressive.

Must be beautiful on a nice summer day.

@ Anonymous: Technically, it's not a peninsula. It's the land where Fort Stevens and South Jetty are located. It's a wedge of land with the ocean on one side and the river on the other. There is a hook at the end that is surrounded by water on four sides except for the narrow isthmus. Google Earth is not the best place to look for names as they disappear with the zoom. It probably has a name, but I'm not seeing it. I may have time to look it up later. Maybe I should have called it a point of land?

Ha ha. Yes draw bridges are fun if you're NIT in a hurry. :)

I like the angle you chose to take this photo from.

Once and the your wide spaces show themselves in your pictures. Of everything you show us this is the thing than more amaze me because is so different from the cramped world we live in here. Wonderful image even with this weather.

It probably has a name, but I'm not seeing it...

@ Anonymous: Thank you! I now remember hearing that, but I'd forgotten it :)

Lovely composition !! Thanks for sharing.

There used to be an amazing railraod tressle that also ran alongside the bridge. I was sorry to see it removed. It added so much to this beautiful spot.