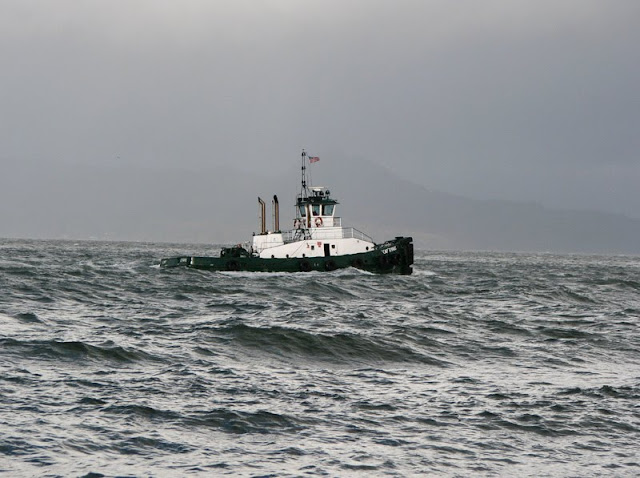 Last night we were supposed to get freezing rain and wake up with the ground under a sheet of ice, but it didn't materialize here in Astoria, Oregon. They kept the weather for themselves a bit further south. I don't know if the freezing rains will make it up our way today or not, but I've decided to post this photo from December 12 last year, when the weather was looming. If you click on the photo to enlarge it, you'll get a better idea of the shiny surface of the water and the wildness of the waves. Remember, this is a river, not the ocean! The waves have been wild at times this week, but the sky has been clear.

I really like this image of the tugboat "Cap" Evans. I remember by looking back at my photos that the clouds were very changeable that day and the lighting was fun to watch. Today we have mostly blue skies with wisps of clouds, and, for here, it's still cold. Here's a very nice photo someone took of the same tug from the river. You can see Astoria in the background - a perspective I have yet to see, as the few times I've been on a boat in the river, we've started from west of town and headed out to sea.

Can't imagine it's not the ocean!

I know, those waves can get pretty wild there. I'll bet to some it does look like the ocean and not a river. If I'm not mistaken that's our side of the river silhouetted in your photo too. Stay warm, and have a good weekend.

The water looks very choppy. The river is so wide I thought Astoria was on the ocean. NOW I realize I need to look up Astoria on a map...so that's where I'm heading.

Looming is a good name for this! Yikes! I think I might get a bit seasick on that tug.

But it's a great photo...the light is splendid and the tug stands out so nice and sharp amidst the roiling waters!

Sheryl, this river ;-) photo is magnificent. An ode to water and grey. It does look very, very cold.

I agree with Ciel: This is a shot that should be framed and given to the pilots or Knappton Tugs. It is a keeper.

Hi, what a great image of the "little tugboat' that could;) Like out of a story! Wonderful stories to great images:) Also, I know I am following two blogs out of Oregon and I thought I added both to my list..if not there I will add today;) I get confuse sometimes since I get into blogs through my site and through dashboard..sorry so long of a message. Wonderful site!

Excellent photo, perfect subject. You are even reminding me that is almost two weeks that I am not posting a tug.