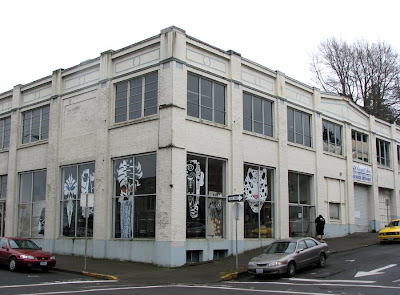 I'm sure that title is too strong. It could be a mellow blending on the inside. Outside, however, you can see that we have to be careful when we're driving or walking. I really hate one-way grids, and that's what we have throughout the downtown area of Astoria, Oregon. In other places, it always seemed much simpler and safer to me when everyone knew we had to look both ways at all intersections. The rules didn't change from place to place. After a little checking, it seems that the statistics on safety are . . . well . . . conflicted.

The old Ocean Crest auto repair building at the corner of Duane and 14th Street has been empty for several years until recently, when it was purchased by the owners of the Fort George Brewery and Public House just around the corner. If they do for it what they did for the other building, we'll see the place come alive. Of course, what caught my attention was the primitive-looking cool art. Inside there are already barrels. And there's art. Whatever the plans are, I'm sure it will be interesting.
I also like this photo because it shows how buildings accommodate Astoria's crazy slopes.
I used to wonder about the name Fort George, until one day I read that this was the name for the entire town at one time. In 1813, Astoria's name was changed in honor of the King of England. The British-owned North West Company had purchased the town; there was incentive to sell to them, because a British ship was headed this way that would have attempted to take it by force as an act of the War of 1812 if the owners had not sold it! The town continued to be called Fort George until 1846, although the Treaty of Ghent in 1814 had caused ownership to be returned to Americans.
Posted by tapirgal at 5:00 AM

G'morning! 'Tis a nice old building with cool stickers and an interesting historical post. I'm not too sure I understand the grid part though...

Re.the weather gadget: either it wasn't accurate or we don't have the same definition of "light snow"! ;-)

I know--when I was in Astoria the streets tend to confuse.
Seattle on a much larger scale has similar streets---you never can go back the same way you came in---and the terrain is very hilly making for odd yet neat looking buildings speciall in the old part of town.

Interesting about the Fort George name. Stanwood was Centerville until a newcomer decided to call it after his wife's maiden name. . MB

From auto repair to a brewery. Not sure how that will affect safety stats ;) but let's hope they take good care of the place!

I agree about the one-way streets..."they've" done the same thing in the downtown Ocala, and to make it worse, at some intersections, people driving east and west will have a stop sign; in the next block it will be people north and south.

Crazy and I've been involved in several near-misses!

Hope this building turns into something good - maybe a nightclub?

Ah, thanks Jacob. I added in the bit about the War of 1812. I was tired last night and didn't get all the info put together :)

Astoria has many confusing intersections. Lots of "right turn permitted without stopping" signs. The roundabout where cars cut across a lane of traffic to enter W Marine Dr. The wierd arrows at 8th & Irving. Maybe this is why my auto insurance rate increased when I moved here?

I don't mind the streets except for the truck traffic. I like the old pix where Commercial is two way and the cars are parked diagonally, but that was a simpler time...no burger king no McD's.

I just plain like the old building. I know you said it was at one time an auto repair facility. If I didn't know better I'd say it looks very much like an old auto dealership.

@ Don and Krise - The building may have been both. Maybe someone will tell us :) It would make a great showroom, and the sign includes the names Chevrolet, Cadillac, Buick, Oldsmobile, Geo. Seems strange to me, but what do I know about car showrooms? Basically nada.

Now I am curious to see what will happen in this building... The sloping street reminds us that Astoria is not flat: I remember the nice houses on sloping ground.

@ DC Anonymous: Thanks for your stories. One of my personal favorites is when you're driving east on West Marine Drive at night approaching the old Youngs Bay Bridge and the power station. To stay ON the main road, you apparently drive off the highway into an unmarked area that may or may not be a road. It's actually a Y in the main road, but since it's very dark there, you wouldn't know this unless you'd been over the ground several times in daylight.

@ Vogon: It certainly is not flat. I'm going to try to get better photos of the hills. The pix never show the slope as much as it is in real life, so I usually set them aside to try again. . . .