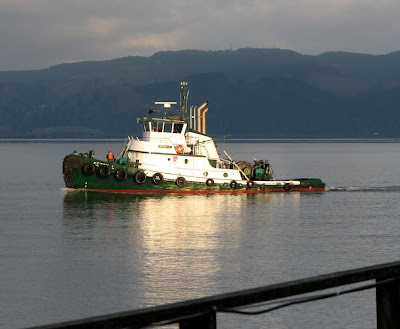 I don't know how many tugboats work in the Columbia River between here and Portland, but Betsy-L is one of them, and I don't think I've shown her before - at least not identified. Although the photo doesn't do justice to the lighting on the morning of December 4, what caught my attention was the bright glow and reflection on a dark river on a dark morning. The small sun break had caught the boat in its beam; a few seconds later, and the light had gone. The water was quite flat, and the hills in the background are on the Washington side of the river.

I think it does it justice, you can see the ray of sunshine perfectly well and the tug's reflection too. Lovely photo!

This is a beautiful photo, love the glow.

I don't have to tell you what a great shot this is with that light shining on the tugboat...

I don't think I've seen the water than calm before...

This is beautiful and fantastic !! Great..Unseen Rajasthan

When I first clicked on your blog and this photo opened, I thought to myself How in the heck did she get sunshine today when it was dark and rainy here from morning to night! Then I read the December 4th part so I calmed down a little. Beautiful shot Sheryl. You were at the right place at the right time once again.

a wonderful combination of colors and mood. I think your followers are really learning what an amazing river this is and what a talented photographer you are.

This is absolutely great !! Shadow is great..