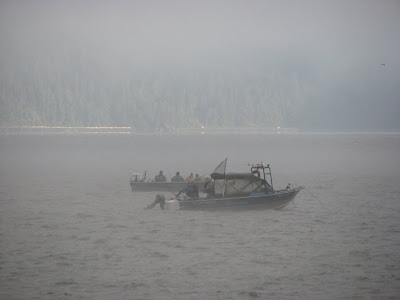 I think that for the next few days, I'm going to post several photos for each day - the regular daily photo, and then some Goonies stuff. Today's first photo is of people out early in the morning fishing for sturgeon on the misty river. I've already seen several weather changes, and it's hard to tell what kind of day it will be. The sparkles in the background are reflections of sunlight on the Washington side of the Astoria-Megler Bridge.

By the way, The Goonies wasn't the only movie shot in Astoria. There were quite a few more. Currently on every store video shelf is The Road. An important scene at the beach next to a wrecked ship was filmed at the Peter Iredale. If you go west from Astoria, that's where you'll meet the Pacific Ocean. The crew didn't even have to bring in the driftwood, because it was already there, as you'll see from the linked posts. They did bring in a lot of other set dressing, though, because we don't usually have Apocalyptic garbage on the beach :)

Below are a few photos I took while doing errands yesterday evening. 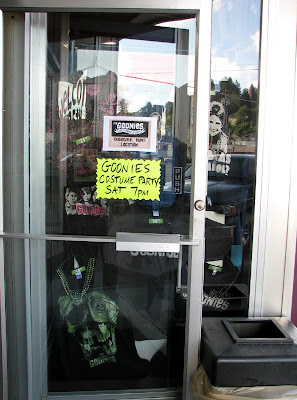 The door and interior of Video Horizons display Goonie memorabilia and a sign announces a costume party tonight. 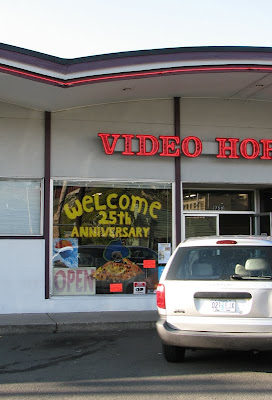 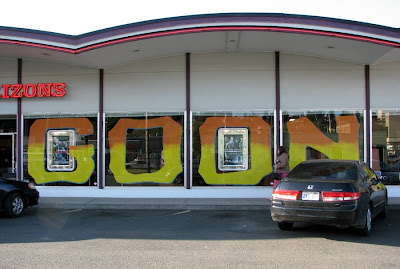 Video Horizons' windows are filled with Goonies. I'm glad I picked up my weekend movies LAST night. I may try to go look at the costumes tonight, but I'm making no promises. 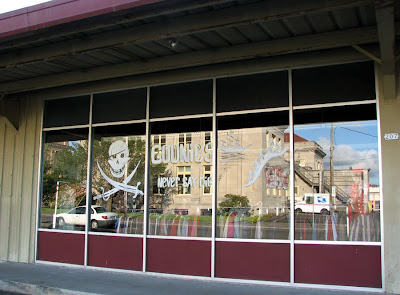 A new thrift shop on 7th Street across from the post office gets into the spirit. 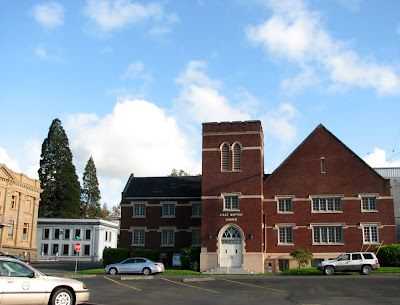 I've been meaning to show you this Victorian-era brick church (First Baptist) for some time, but there are always cars in the way. I'm showing it now because the gray building to the left is the Goonies' Jail. 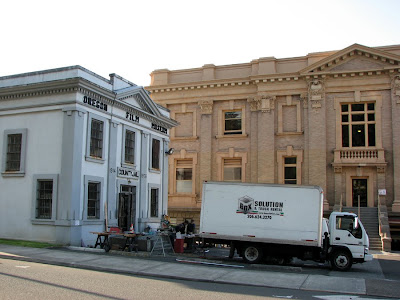 Here's the jail from the other side. It will have its grand opening as the Oregon Film Museum this morning, but as of last night they were still working on it. The words along the top are new. I think there was some text there during the filming, but I'm not sure. Typically there was none. 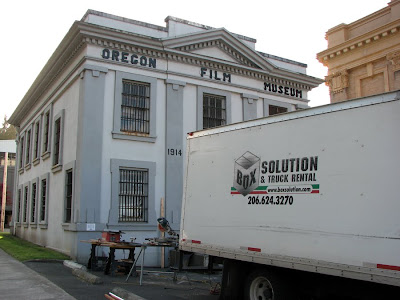 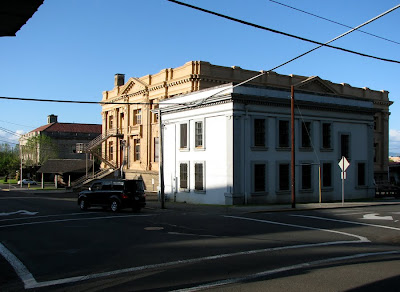 I only watched the first part of the movie because, unlike so many people around the world, I couldn't stand it. I usually don't give up on a movie part way through, but in this case, I did. I remember the jail scenes at the beginning, though, and I think there was a shot from this back corner. I wonder how they got rid of all those wires, or if they left them in the movie. 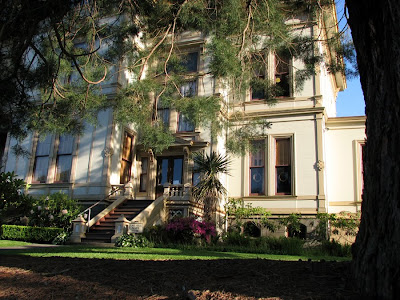 Didn't somebody's father work at a museum? They used the Flavel House across the street from the jail as the location for the museum. It's not such a stretch, as the Flavel House is - actually - a museum. 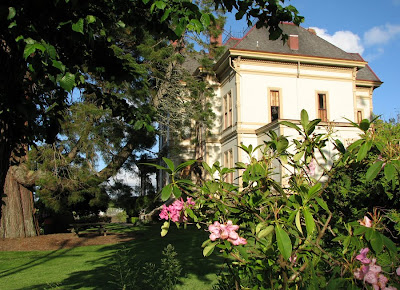 See Weekend Reflections from around the world.

This blog is sponsored by Tapir and Friends Animal Store.
Posted by tapirgal at 6:48 AM

Between your rave review and the images on the thrift store, I won't be going out of my way to look for this movie I've never heard of anytime soon. Glad I got to view the sites you posted, though. :-)

I just left Astoria yesterday and I found your pix exciting. I enjoy you capturing a comprehensive view of the activities of the day.

When I think of sturgeon fishing, I think of the Beluga Sturgeon in the Caspian sea and CAVIAR! Nice to know we have sturgeon in Oregon.

I never saw the movie. But I do love that first picture! Not sure I'd want to be out there fishing, but there was a time when I'd think that was the most fun in the world.

Must be getting old!

The misty sturgeon boat shot is perfect ... just the right amount of mystery ...

I may very well have to get ahold of a copy of the movie now - haven't seen it in years - when it first came out we watched it at least 4 times.

I may just have to rent that movie.

I didn't know Goonies was filmed in Astoria. I was wondering what all the Goonie fever was about!

Your first photo is great. So dramatic with all the fog and such.

Okay now I suddenly feel like seeing Goonies again. :) Also your first shot reminds me that I want to take pictures of a foggy place. I haven't seen any fog in this part of the country yet.