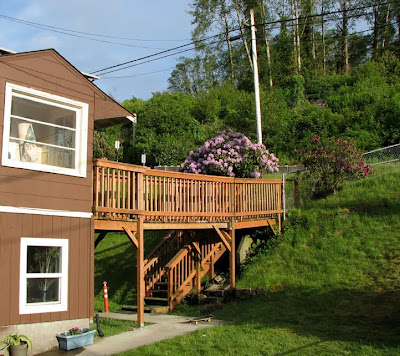 Although this walkway isn't removable the way a real gangplank is, it provides access from the front door of the house to the hillside near street level. There are a few of these arrangements on Bond Street; this house is toward the west end of Bond near the mini mart. The trees on the hill above are very sparse these days. In spring of 2007, there was a major slide caused by heavy rainfall, and then our subsequent big wind storm of December 2007. Even the street hasn't recovered, and the hillside is held up off the road by cement retaining walls, with the street narrowed to one lane at the intersection with Hume.

This portion of the hill has collapsed before and was featured years ago in Life magazine on January 25, 1954. An ad for the issue lists part of the contents as, "massive mud slides (earth movement) in Astoria, Oregon moves houses and more." There are photos in the local history museum.

This blog is sponsored by Tapir and Friends Animal Store

Houses on the hill are nice, but not when the hills are moving...

Can it be safe to live there?

I'm thinking their homeowners insurance must be through the roof!