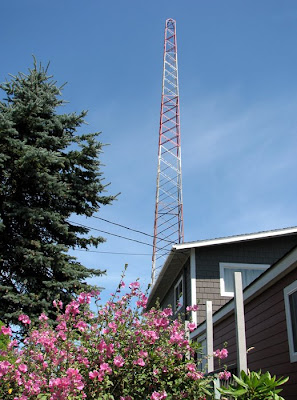 My business and nonprofit tapir conservation organization use the downstairs part of this building on the River Walk, while the owners use the upstairs portion. We share the space with the radio transmitter room, which in turn broadcasts five stations from the tower standing in the river behind the building.

Well, the other day we needed a new printer because the old one was clearly kaput. So why not move the new printer and thermal label printer to the other side of the desk to make reaching them easier and increase our packing efficiency? Good idea. No problem. Unplug everything, walk the cords around, weave them in and out of the computer desk (computer desks are all perfectly constructed for cord routing, we all know that). Rearrange a few wires. Great. Perfect. Plug everything back in. Half the room goes dark. Internet goes down. No big deal, we have breaker boxes. Hmm. Looks like the breakers are still on. Better call Rob at the station, I don't really want to be messing with something I don't understand. In a funky 1950s radio station building turned transmitter. "Hi, Rob . . . " What? What's off? Ooops. Ooops! KKEE is off the air. Didn't realize that one of our breaker switches had that much potential. A guy comes over and explains that just because the breaker switch LOOKS like it's on, it doesn't mean it actually IS on. OK, thanks. Fixed. All working again. Cool. And everyone was nice about it. What's the moral? There probably isn't one. It's just one more day in Paradise, and I really mean that. I love it here.
Posted by tapirgal at 12:15 AM

These things happen once in a while just so you can check your heart rate. I'll bet it was beating pretty good for a while. :)

Hahahaha! As I was reading, I was expecting a different ending to the story.

Glad to hear it worked out so nicely.

That's so funny! Well, it probably wasn't all that funny when it happened...I mean, knocking a radio station off the air! What power you have!

Now, if KKEE says something you don't like, you could take a break for a minute, make the breaker look like it's on when it really isn't and KKEE is gone...

Have a great day. Thanks for your comment on Paree...I did a "vintage" shot of l'Eglise du Dome today...

A bad situation made good and yes it does look a pretty perfect place to live.