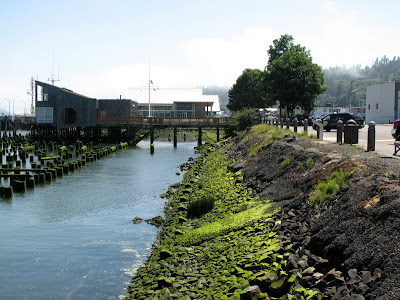 On July 16th, I thought the river bank at low tide appeared strikingly verdant. The biggest patch of green is actually a slab of concrete, which is part of the paving that keeps the embankment from eroding. It's turned green with life like everything else that spends so much time covered by water. The tide rises and falls approximately eight feet here twice a day. The water was very flat when I took this, but depending on the wind, the waves are often quite impressive. Pilings are left from old buildings that have disappeared. It adds to the romance of the river, for sure.

I took this photo from the parking lot of the old Englund Marine building at the foot of 15th Street. There is a sidewalk at the top of the embankment, but people exercising or enjoying the view use the stretch of parking lot just as often. There are a couple of comfortable benches, too. The building on the left is the dispatch office of the Bar Pilots (a separate organization from the River Pilots), and the building directly at the end of the water is the outstanding Maritime Museum (and an unusual design), which will have plenty of photos of its own as time goes on. Here's a former post of a ship and buoy in permanent dock there. Active Coast Guard ships also uses docks at the Maritime. It's a little burned out by the exposure, but you can just see the clouds settling low into the trees on the hill.

Today is Think Green Thursday in the world of photo memes.
Posted by tapirgal at 10:17 AM

An eight feet tide it's so hard to imagine here. Your post reminded me of the 'vertical lawn' of uncut grass we have on the stone walls of our canals.
I followed your links about 'Columbia' (the ship) and the photographic journey on the river. I'm discovering a world... Sorry for my ignorance about your area and thank for your help.

Green stuff like that has become a total nuisance on the French Atlantic coast. They say it's due to overusing pesticides and other chemicals over the past few decades. The beaches are literally littered (!) with green seaweeds, sometimes a metre high (sorry, no good at feet). What I like best is the old pillars, reminders as you say of buildings long gone...

I echo VP - 8 foot tide is really something!

Beautiful shot...love the green (is it moss?) ... you have so many fine places to admire and experience!

Lois has been going through your Paris photos - I haven't had time yet, but will - she loves them!

Hope the heat has dissipated!

Sheryl---I just may take you up on the offer to visit Astoria and say hey to you too.

I love old pilings too maybe as you said' reminders of long gone buildings'. Out in the waters off Stanwood--which was quite a mill town years ago--there are many different areas of posts. In Skagit Bay and the Stillaguamish river. MB

I wish there was something still on those pilings....a deck for mending nets?

It makes a nice photo. The green algae on the rocks looks very fine.

I really like the mossy green on the embankment. Surprisingly, I find that Maine is very mossy too because of the constant moisture in the air.

I never thought (for a million years) that Maine would be humid and muggy. Go figure.

Fantastic shot and great information !! Thanks for sharing..Unseen Rajasthan