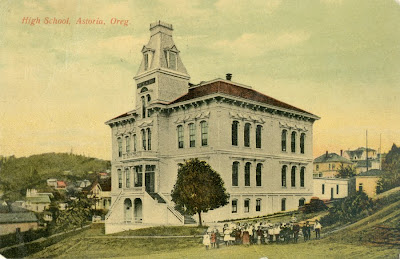 The photo above is another postcard loaned by Midnight Mike. The only date on it is the postmark, which is 1909. The picture shows the old Astoria High School at the corner of 8th Street and Grand Avenue. The photo was taken from 7th and Franklin. 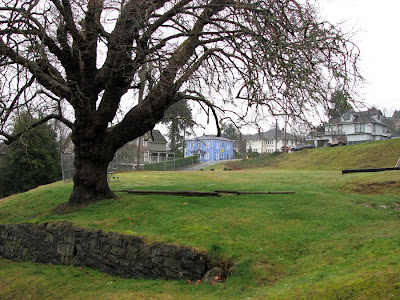 Earlier on this blog, I posted the photo above, taken from almost the same location (7th and Exchange), but from a vantage point closer to the ground. In the next photo, taken the other day (March 23, 2010), I was standing at the opposite corner of the park, which is somewhere in front of the blue house in the background above. 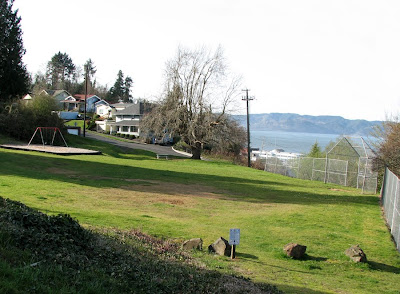 You can see what a lopsided piece of ground it is. I wonder why they eventually tore down the building? The park is currently used as a baseball diamond, and at the left is a swing set. There's a picnic table with benches near the tree. Of course, that's the great Columbia River in the background; the hills on the other side are in Washington.

This blog is sponsored by Tapir and Friends Animal Store.
Posted by tapirgal at 5:00 AM

Maybe they tore it down because students kept falling out of the windows?

I remember your previous post of this area and thought then, as now, this is a gorgeous piece of land! At least it is being put to good use!

I remember the previous post too. Great post as usual. It was a lovely building. 1909, the birth year of my grandmother...

informative post I didnt know the school had been there. Nice update on that corner you featured the other day.

I remember that post too. I wonder if it eventually became unstable in some way. It sure was a neat looking old school.

I remmeber the corner, a pity for the school building. I wonder what they can do more with this piece of land.