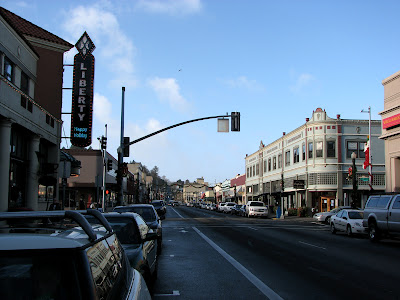 Astoria, Oregon ~ December 8, 2010
Nobody I know calls it "Main Street," but that's what this street would have been named in many, many towns in the U.S. In Astoria, there is a naming system starting with A near the water and running through the alphabet. Numbered streets go the other direction. Aptly named Commercial Street (technically, "Commercial Avenue," but I gave up on the "Avenue" vs "Street" convention), Commercial and 12th is one of the main downtown intersection in Astoria, although there are a few other busy intersections that rate stoplights.
I initially took this photo for someone who wanted to see downtown Astoria dressed for Christmas. You can see a few of the decorations here, and I'll show more as the weeks go on. Notice the blue sky. It's just a teaser between downpours, and a very welcome one, too. I don't know any town that shimmers quite like Astoria in the sunlight between rains.
This blog is sponsored by Tapir and Friends Animal Store.
Posted by tapirgal at 6:00 AM

This is iconic...small-town America...but dynamic and full of energy. A lovely shot of a lovely town - that I've got to visit one of these days!

@Jacob, do go visit Astoria! It's a charming town... with a charming hostess! :-D I agree, this is an iconic street in the USA, but it is definitely one of the more vibrant ones.

Thanks for taking this picture. Astoria is about my favorite place on earth and I haven't been there for Christmas in years!

Is there only one stop light? Man, when I was growing up, there was stop lights at every block all the way through Commerical Street. I see the old Liberty theater is still there, I heard now that its a "multi plex".