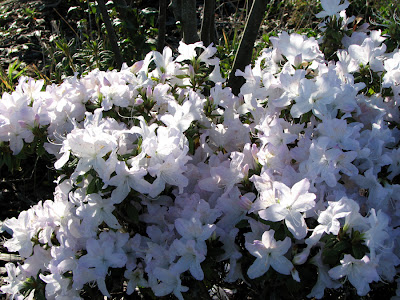 Astoria, Oregon ~ November 10, 2010
I thought I'd post something pretty after yesterday's disaster and the big hole on Tuesday. I noticed these azaleas compellingly in bloom just as I was leaving town. I didn't get a chance to poke around and see how many other plants were in bloom around Astoria, although I saw a mint plant with a couple of small purple flowers, and I noticed that some nearby twigs had bright green buds on them. I didn't know azaleas had two seasons, so I looked it up onilne. 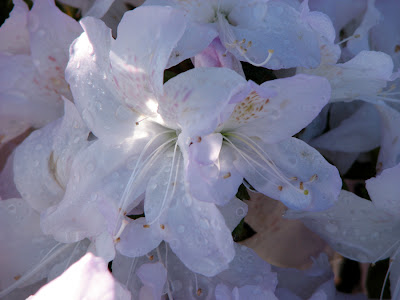 Apparently, if it's first been cold and then warms up, the buds that have already formed in anticipation of spring will sometimes open. It was unseasonably cold for days and days on end at the beginning of November. I can't remember, but it may have started in October. Then, yes, it warmed up for awhile. 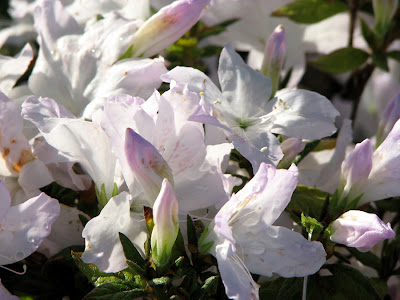 My question is, what happens to next year? Does the plant form a second set of buds? I certainly hope so, because I'll be unhappy if spring comes and the azaleas are all bloomed out from November.
This blog is sponsored by Tapir and Friends Animal Store.
Posted by tapirgal at 7:00 AM

This kind of blew me away at first 'cause I couldn't recall seeing any azaleas this late in the year, but then I remembered at our house we had a bunch of red ones sort of protected in the front and they did carry their blooms until late in the year or until the cold weather did 'em in...

They're sure beautiful, and I think they will come back in the spring.

Certainly nicer to look at than the remains of a cannery. November?????

Your white azaleas are very pretty... hope you see them again in spring.