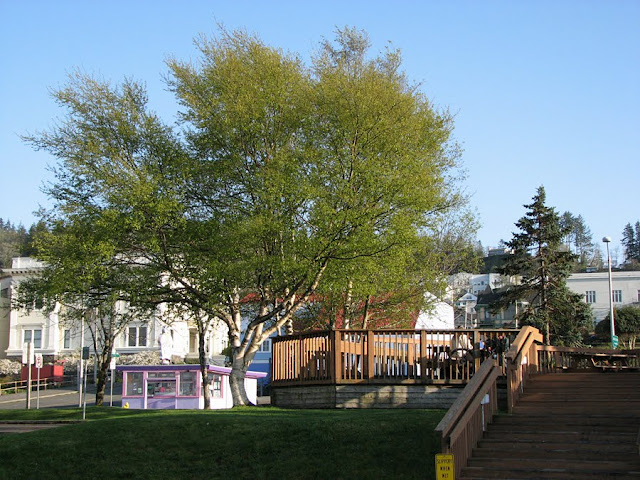 The purple and lavender building is Custard King. It's very popular during summer, when you can see people sitting at the sidewalk tables lapping at their ice cream cones before they melt. I took this photo from the River Walk near 16th Street. It's hard to tell here, but Marine Drive, the main thoroughfare, runs behind the trees and in front of Custard King. The big white building behind it is the Heritage Museum of the Clatsop County Historical Society, a substantial Classical building which was built in 1904 as Astoria's City Hall. The blue building is the Shallon Winery. The wood deck on the right was built by the city with picnic tables on the platform for anyone to use while enjoying a view of the river. Oddly, the only time I've gotten flea bites in Astoria was when I sat here eating sandwiches one day. I've never been back to use the tables, although I walk past often, because it's near home!
Posted by tapirgal at 12:30 AM

I really like this river walk from where you can see more than the river. Wary of flea bites I'll take an ice cream instead of a sandwich.
I forgot to tell you that there is a place in central Livorno called Astoria, I'll soon post something about it.

Ooooh, ice cream sounds goooood! Sorry about the fleas. I wouldn't think that would happen again, but I understand how you feel. One flea on me and I'm ready for a shower.

Maybe we should sit there and have a little picnic when it is cooler and the leaves start changing color on those trees adjacent to the platform.