A snake's-eye view of the Astoria-Megler Bridge 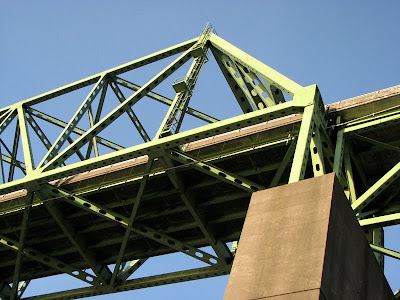 We love our bridges. Not only is the Astoria-Megler Bridge the only convenient way to get to the Washington side of the Columbia River from here, but it's also one of the most outstanding and scenic man-made local features. Above is one more view, taken from the Maritime Memorial at the water's edge. For all of my other posts featuring this bridge, click here. I'm sure there will be more coming up. You really can't avoid this spectacular landmark! This bridge holds a record for being the longest continuous truss bridge in the world, and it was the last segment of US Highway 101 to be completed between Los Angeles, California and Olympia, Washington. It was built between 1962 and 1966. To pay off the 24 million dollar cost, a toll was charged. To me, one of the most remarkable things about this bridge is that they actually removed the toll in 1993, when the cost had been paid! Now you can drive across freely and not even think about stopping.

The bridge looks like it has a nice coat of paint, but recently bids were taken to repaint it due to the lead used in the old paint. This is going to require hanging canvas or some other method of capturing the contaminated paint chips and dust, so it doesn't go into the river. I don't know how this will affect our scenic icon, but it will be a huge job, as the bridge is just over four miles long.

Although I've used this photo for Skywatch Friday, our skies have not been uniformly blue. In fact, typically our current weather is heavily overcast all morning with blue skies seen only in the late afternoons.
Posted by tapirgal at 12:30 AM

Our skies here have been about the same. Overcast, Overcast and then some late sun and back to gray. I like it--it is more normal. I just want it to rain as my webs are drying up.
I love bridges too and yours is a beauty. I have some great shots off that bridge. I just stopped in the middle and took some good ones.
Take care, MB

I always love going across that bridge. One of these days you should take a shot on the bridge so those not familiar with it can see how big the hump is when you're driving across. Good shot Sheryl!

I also love this bridge. I couldn't find a place to get a shot of the whole thing, its so long.

Obviously I am just going to love this with my own bridge obsession.

Nice composition - a study in lines and angles (and color). Well done!

I had already seen this bridge in the distance in some photos of yours. Browsing back your linked posts I learned to appreciate the bulk and the shapes of this majestic landmark.
By the way your July Theme Day was quite similar to mine, bridge apart!

It is nice when they remember to remove the toll when the bridge is paid for.
Sky seems nice and blue to me.