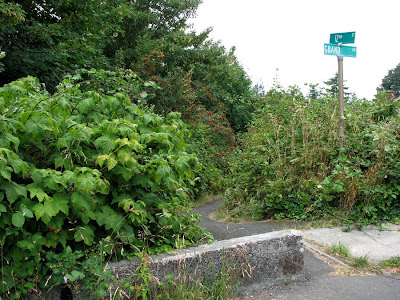 No, the street sign is not misplaced. Behind me, 12th Street continues up the hill like any normal residential street. In front of me, it takes off on a narrow path through the berry bushes for one short block. Oddly, I've never followed it. Until I looked at the street sign today, I believe I thought it was private property. Taking notice, I stopped and wondered what the path was like, but as I had to meet someone on the street in about one minute and I didn't want him to drive on and miss me, I continued along on Grand. I can't picture what the other end of the path looks like, so I'll make a point of finding it.

There is history here, too. Thirteenth Street was the dividing line between land owned by John Shively and John McClure, both of whom arrived in Astoria in 1843 with land claims filed in Washington, D.C. The story goes that the men didn't like each other and could not agree on what size a lot should be. Because of this, the lots west of 13th ("McClure's Astoria") and east of 13th ("Shively's Astoria") did not align evenly, and you can still see a number of odd curves in certain streets and other streets that don't go through from one block to the next. Thirteenth Street is only half a block long in the downtown area, with another block made into a narrow passageway. But in the residential section, 13th Street doesn't exist at all. There's a very wide block between 12th and 14th Streets, with the cross street of Grand stopping and starting again at a different latitude. Someone connected the pieces with this intriguing leafy path.

My thought for Think Green Thursday is this: Wouldn't it be "grand" if half our city streets looked like this? Maybe we'd all be walking more!
Posted by tapirgal at 12:10 AM

Okay, now you've got us wondering what's up the path. It's interesting to really look how certain towns are laid out. In many cases it doesn't make much sense, but we adjust.

Funny story about Shively and McClure...just goes to show how decisions made at a point in time carry weight for many years, even centuries!

Now, Sheryl, I never cared a whit about what was at the end of 12th street until I saw your photo! Now, I'm bugged. Heck, I may not even sleep tonight!

You will, I hope, take the less-traveled road and let us in on whatever secrets you find????

Now I want to know too! That's a very interesting bit of historical information: how places were shaped!

Fascinating story. And it only makes us want you all the more to take yourself and your camera down that path. Please.

Interesting. Can't wait to see what you find out.

Now I am here at my desk on a Friday morning and instead of working (or going out for a coffee), I'm worrying about the end a leafy street in Astoria, Oregon...