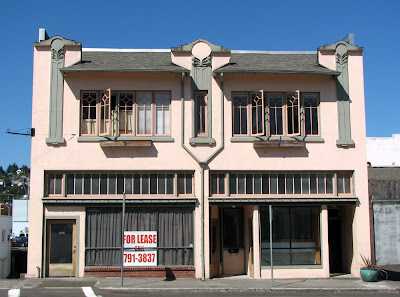 I think this is one of Astoria, Oregon's, most imaginative downtown buildings. It's hard for me to say whether it's more Art Deco or Art Nouveau, or a combination of the two. In any event, it's unique. I don't know the date it was built, but my guess is, around 1923. It's in the area that burned in the 1922 fire, and the style fits with the period of re-building.

The location is the corner of 13th Street and Exchange. In fact, this building and the small parking lot next to it take up the entire length of 13th Street (see the photo below). The most coveted locations for small businesses are a block and a half away on Commercial Street, so at the moment, this charming building sits empty. 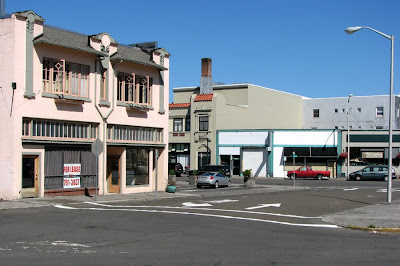 This is the entirety of 13th Street. Or at least I think so. If you go just to the right outside this photo there's a narrow passage for foot and bike traffic that goes for one block, connecting Duane and Commercial, and may qualify as an extension of 13th Street. I'll save that photo for another day. Because of the disagreement between Shively and McClure in the 1800s, 12th and 13th Streets do not fall into a regular pattern in the city grid, as they would if it had all been gridded by one person or on one system. Thirteenth Street became a strange anomaly in the grid because of it.

I took this photo on a recent bright, clear day. Today it's overcast and, thankfully, cooler.

It's a nice looking building and it doesn't seem that far removed. I guess I wouldn't think it would be that hard to find tenants. There are some interesting parts of the city due to those two bickering. Thanks for showing us another one and have a good weekend!

I like it a lot! Charming is the word, I'd use.

A very tidy looking building. What do you suppose the proper tenants should be?

A sundog is usually when you see rainbow colors in the clouds. It is caused by the sun shining on ice crystals inside the cloud. MB

It has personality, is the whole thing empty? what a shame!

Oh I love this building. It needs to have an antique shop on one side and a book store on the other.

I'll look for this building next time I get to Astoria.

Definitely Deco. Would fit right in on South Beach.

Used to house a collection agency, maybe the lovely building rejected it.

Lee, that's funny! The last thing I would picture there is a collection agency. I remember when The Healing Haven was there - New Age, spiritual, health-conscioius books, etc. It seems a more fitting use for the place. But Healing Haven moved onto Commercial, probably because the street gets more business, although I didn't ask the owner.

Lovely building, well designed to the point of using a symmetrical square drainpipe around that narrow central window. I hope they'll find soon a business fit for this place.

Cash Online Get Easy cash at your door step