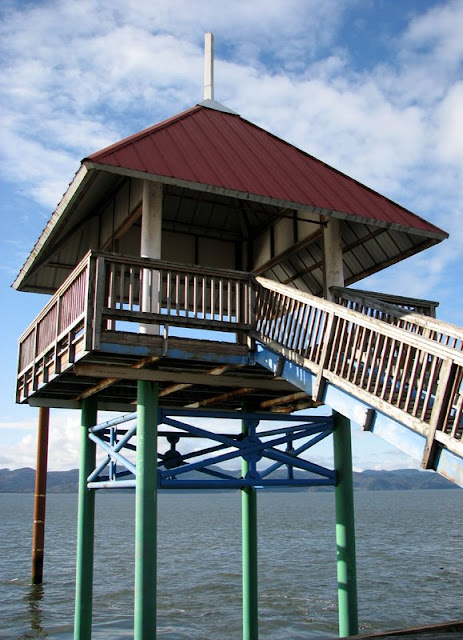 This platform always looks tropical to me, although Astoria is anything but tropical, and this year we haven't even had that many t-shirt days so far. Maybe it's the shape of the roof, and maybe it's the colors and the poles it stands on that make it appear to be an interloper from warmer latitudes. In any event, we love it, and we usually take or direct visitors here. It's built next to the Cannery Cafe at the end of the pier on 6th Street, and it's fun to hang around and watch the ships; seals; sea lions; birds; the great, wide expanse of sky; sturgeon fishing in season; or just watch the Columbia roll on. From here, you can observe the huge ships travelling the whole length of town and farther. There's a two-level deck at the end of the pier with a pay-per-view telescope that I've never used, and an interpretive plaque about the original people of the area. The pier is only a few yards long, and is essentially part of the River Walk.

The only uncool thing in the photo, as far as I'm concerned, is the pole on the left. It's an initial part of the planned condo that was to have been completed this Spring. When the economy tanked, or maybe for other reasons I don't know, it never got started except for a number of tall poles planted in the water. They already mar photos of the river, bridge, and people's sunset photos from here, and if the building is ever completed, it will block, from the platform, one of the views everyone comes here to see - for tourists and locals alike. (In the linked photo, you can see the legs of the viewing platform at the left of the picture.) We will still be able to see a large part of the river and the flat part of the bridge, but not the tall towers that give it most of its character. Once blocked, the view will belong to only those few who buy a condo here. It's sad and stupid. I don't usually get on soapboxes in my City Daily Photo posts, but this is a pet peeve. Only eight years ago when I drove into town for the first time, you could see more of the river from the highway than you can today. Over the next few years, views may be blocked that will never again be accessible to the public. One thing I'm doing as I wander around town with my camera is to document and blog those vistas and old buildings that will someday be gone. It's happened already, and apparently we don't care enough to stop those who can afford to do it.

NOTE: I have since learned that if this condo is built, there will be a viewing deck open to the public all the way around the building. It will actually afford a beautiful view of the bridge. I still have feelings about the view being blocked from the actual river walk (bike traffic, for instance), and the height of the building. However, I've learned a lot more about the topic of waterfront views and access, how they have actually improved since earlier years, and what the ongoing issues are. As more comes up via photos, I will both learn and talk more about it. Apparently there is a lot to be said. Basically, in the 1800s, it was all about industry, which left statutes in place that we all deal with one way or another. (To be continued.)
Posted by tapirgal at 9:24 AM

AMEN! I like your soapbox...perhaps you should get on them more often. :)

Thanks for stopping by my blog. I LOVE Astoria (and almost anywhere on the Oregon Coast), and was excited to find your blog. I hope to be back.

I am going to be so mad---but as you know, to the city money talks---when we cannot see the waterfront anymore. Condos everywhere--but ya know of all things in a bad economy, condo building stops.

You stay on your soap box and maybe things could change. MB

Very sad. I'm glad that the bad economy has had some positive effects on your city at least. I also prefer the cooler weather by the ocean. I think you are blessed to have the cooler weather. I used to live in South Florida and it's about 95 degrees there now with high humidity. Not something that I miss.

I so like a soapbox rant. The image is crystal clear of a very unusual structure to me

Looks like a cool place to hang around. Lots of fun things can be done there. Great looking platform and the sky is awesome. You captured them well. Thanks for sharing..