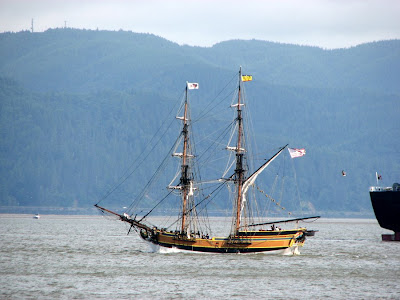 On Wednesday the Lady Washington passed this way under cloudy skies. The clouds and haze are still with us, so I'll go ahead and use this interesting photo for Skywatch Friday. You can see how the Lady Washington's size compares to the stern of one of the tankers that more often travel the river here. Both the replica you see in this photo and the original tall sailing ship have gathered their fair share of fame. The replica was built just up the coast in Aberdeen, Washington, in time for the 1989 state Centennial, and has been claimed as the "State Ship," which I'm sure is very different from Plato's "ship of state"! I've seen the Lady Washington rarely, but when I do it's always a treat. Some of us just call her "the pirate ship," and we all know which ship we're talking about. The Lady Washington has actually been in a number of movies, including Star Trek Generations, HMS Interceptor, and Pirates of the Caribbean.

The original Lady Washington was built on the East Coast in 1787 and sailed around Cape Horn. She was named after Martha Washington and was captained for a time by Robert Gray, the man who entered and named the Columbia River (on a different ship, the Columbia Rediviva) in 1792. The Lady Washington was also the first American ship to reach Japan. You can read more about this historic vessel in Wikipedia.

It always lifts the spirits to see this beautiful ship in our waters, and she sometimes docks at the Maritime Museum, where you can get a closer look. She currently sails up and down the Pacific Coast teaching sailors and non-sailors about seamanship, customs, and about ships of her era, keeping history alive and fascinating.

This is my entry for Skywatch Friday. Come visit skies around the world today!

I want to thank all my friends who have been visiting my blog and commenting. I've had shopping cart technical issues, and then I took a day off. I am REALLY looking forward to spending time visiting your sites again! Hopefully later today :)
Posted by tapirgal at 9:53 AM

I love those old sailing ships... they have an air of romance about them..

I love the old ships too. I'd love to go aboard and see one up close next time they're in town. Thanks for the history too.

Those old ships really were works of art, especially when seen afloat.

A good definition of the word "courage" would be the willingness to cross the Pacific Ocean in a small ship like that, without any modern amenities.

We used to build ships like this here many years ago, Like The Star of India. Beautiful image.

She's a great boat. I got to go aboard last year when she was in Everett. Lady Washington and her companion the Hawaiian Chief are beautiful. MB

This is one beautiful ship! And you caught the light perfectly as the ship stands out in sharp definition.

Thanks, too, for the commentary...it appears to be doing a very useful job as it plies the waters of the Pacific Coast.

The Lady Washington is something to see. I got to take photos of her in mock battle with the Hawaiian Chieftain last year during Portland's Rose Festival. Click on her name to see the lengthy post--I couldn't help myself, as I'm sure you realize--there were so many interesting photos in my camera, thanks to your beautiful ship!

Oh, that is just too cool! How lovely! Nice Star Trek reference too.