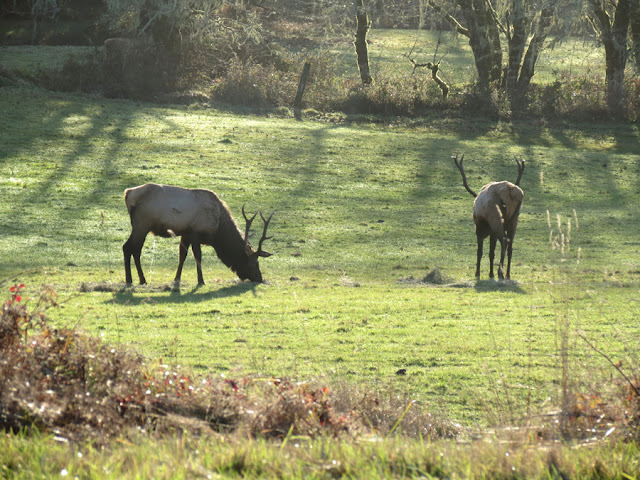 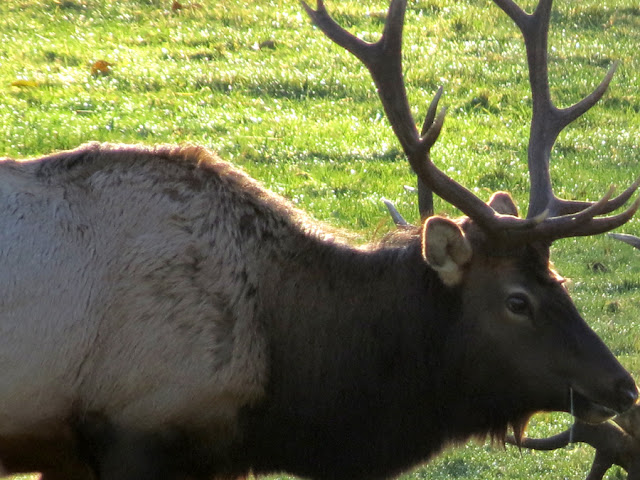 Jewell Meadows Wildlife Area, Oregon ~ December 3, 2011
Our local Roosevelt elk are certainly among nature's most majestic creatures. Almost the size of domestic cows, they are quite a bit larger than deer. Check out the video on this page to see them in action and listen to a description of the reserve. We did not see the herd of hundreds described - only a dozen or fewer were grazing the area on the day we were there, but I have seen them in huge herds much nearer home. Only about five miles down the road they used to congregate on the land that has now become Home Depot, Costco, and Goodwill, among other big boxes. I've also seen them near the airport and the UPS office just across Youngs Bay. Here the elk would swim in the bay around the fencing and get inside the fenced area to graze. It was quite a sight.
I haven't been out to UPS or the airport recently. Does anyone know if the elk still congregate there since the new stores have come in?
There are several places in Oregon along certain highways where you can pull into a viewing area and watch the herds forming in the evenings. As it turned out, we had a beautiful day on which to enjoy elk-watching. Not the least of my enjoyment was the beauty of the area with its back-lit bright-green mossy trees.
This blog is sponsored by Tapir and Friends Animal Store.
Posted by tapirgal at 12:37 PM

How wonderful! I've always looked for them when we were in Colorado but never saw any in the wild...lots of deer but no elk. They are rather elegant creatures!

looks more wilder than our deer on Miyajima!

How amazing to just see these animals wandering around. They are beautiful.