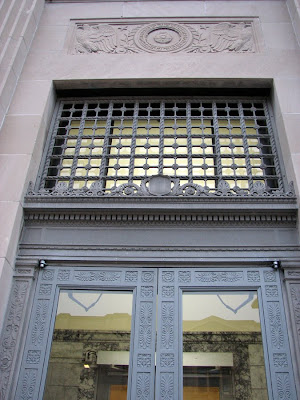 Here is one of the three sets of doors entering the only post office in Astoria. On November 1, we saw the doors from the inside. They were actually the doors next to these, as this is the set on the left as you go in, and the doors shown previously were the center set. I've liked this building since the first day I saw it, which was probably almost immediately after arriving here in the summer of 2001. For one thing, it was a nice contrast with the latter-day boring architecture of the post offices where I'd lived recently. For a long time, the post office was a place I visited almost daily, due to shipping orders from my online store. Now they pick up, so I go less often. But whether it's often or not, it's nice to have a fun building to look at. It seems as thought it belongs to a much bigger town with the marble, the ornate metal, and the heavy glass tabletops.

One of Astoria's claims to fame is having the oldest post office west of the Rocky Mountains. Although the current post office is an older building, Neoclassical in style, I didn't think it could be the original. But it was quite some time before I stumbled across the location where the original had been. It had been maintained in the home of Astoria's first postmaster, John M. Shiveley.

The building makes you want to go to the post office in spite of long senseless lines and surely clerks, who occasionally go "postal".

Lovely details Sheryl would love to see more of the building.

I agree with everything you said...when I was in my teens I would pick up a company's mail at the Minneapolis downtown post office early in the morning, deliver it and sort it before school.

The downtown post office was a huge, palace-like affair covered in marble and brass and had a distinctive smell...I loved the place.

I sense a similarity to my post from yesterday. As I've said before, I'm a sucker for these old massive historic buildings. So much style. You are so fortunate that this Post Office is still in operation here instead of a renovated 7-11.

Reading the comment of Lee I wonder if Postal Offices and their dwellers are identical everywhere!

I've loved this building since I was a kid. Something about all the marble inside and the iron work on the doors and above. I also used to be fascinated with the 1st National Bank Building(now Wells Fargo). It was neat as a kid, all the tall ceilings, wood and marble details. They modernize and lose all the character. I suppose if you went back to the Midwest where nothing ever changes you might find some banks that look as they did 50-75 years ago.

That's a pretty majestic door for a post office. You can clearly see the intricate details on the door, and they go well with the door frame and the overall façade of the building. In fact, the design is so detailed that you wouldn't think it a post office!