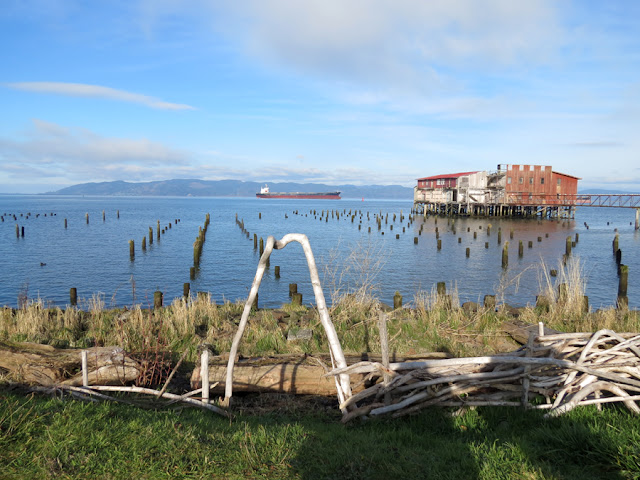 Astoria, Oregon ~ December 4, 2011
The driftwood fence from yesterday's post also has a driftwood gate. In warmer months it leads to a garden. The building, "Big Red," is a former net shed owned by Royal and Sarah Nebeker and used as Royal's painting studio. It was severely damaged in the big storm of 2008. Royal and Sarah's son Israel used the blown-out building as the setting for a video for Blind Pilot's song "Go On Say It." If you want a glance inside the building, check out the video. That's Israel lead-singing and standing on his toes.
In the comments for yesterday's post, Lee described what the pilings were for: "Some of the pilings had decking for gill netters to tie up. The large cluster had a net shed or a fish receiving station."
This blog is sponsored by Tapir and Friends Animal Store.
Posted by tapirgal at 12:32 PM

What a gorgeous fence and gate. I love driftwood ... whenever we go to the beach, my car is stuffed to the gills with it! My mom arranges the pieces around her garden.

And that shed building is AWESOME - it would be a perfect place for a video! I must go check it out.

Oops! I missed the fact that was a driftwood fence. I thought it strange that all that white driftwood would so neatly arrange itself after being washed ashore.

So, that's the second mistake I ever made!

Perhaps you will show us the garden in the warmer months?

Beautiful images of what looks like a wonderful place to live. No wonder you settled there is 2001. Thanks also for your comments and visiting my blog perthandotherplaces. Best wishes, Rae

It's an awesome photo! Thanks for providing the story behind the photo also.
Thanks for answering my question on the last photo!

This is a fantastic view. :)

What a great view!