Cemetery on the Hill 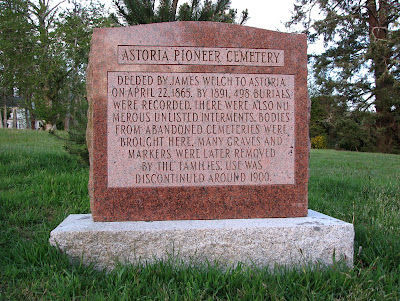 On the crest of the hill above Astoria is a beautiful, if somewhat strange, cemetery called Astoria Pioneer Cemetery. The part I find strange is that there are so few stones, and among them are a couple of rather bizarre slabs that defy logical explanation.

The marker above gives a brief history of the cemetery. I was glad it was there, answering some of my questions. It says:

"Astoria Pioneer Cemetery. Deeded by James Welch to Astoria on April 22, 1865. By 1891, 498 burials were recorded. There were also numerous unlisted interments. Bodies from abandoned cemeteries were brought here. Many graves and markers were later removed by the families. Use was discontinued around 1900."

The fact that this information is delivered on a grave marker gives an eerie sense that the location is more like a theme park than a real cemetery. The park, like so many older cemeteries, is a peaceful and beautiful place to visit. But unlike so many older cemeteries, there is very little to see or read here. Most of the ground simply looks like a park with grass and trees, robins and squirrels. There are few markers, and no flat headstones at paced intervals. There's an attractive split-rail fence surrounding the green. The short history makes me think of the Catacombs of Paris, and the city's small cemeteries being emptied out for reasons of overcrowding. Our own little cemetery is one more thing on my research list. I expect that bodies were moved here for many reasons, including, perhaps, a lack of regulation in this frontier town in the early days. Unfortunately, many of the few remaining markers are almost impossible to read, or at least they were almost impossible in the low light when I visited one evening.

I was happy to find this wonderful page online, part of a much larger web site called "findagrave.com." The Astoria Pioneer Cemetery page shows several photos of the cemetery and gives a complete list of the people interred there with photos and descriptions of the markers. A woman named Renee did a remarkable job of supplying information and photos to add to the history of Astoria's pioneers.
Posted by tapirgal at 8:57 AM

Love this post, love the find a grave and knowledge that they post the people who are buried here.
My favorite is to drive past that cemetary in the a.m. when the mists still swirl or at dusk...sometimes on a foggy, moonlit night the place has a sort of sweetly haunted feel.

What an interesting history this cemetery has had! I do a lot of poking about in graveyards near and far researching family history, and they have come to interest me more and more for themselves, not just for family connections. The find a grave website really is a wonderful resource and it was nice of you to list it as only genealogy hounds tend to know of it. Neat post!
-Kim

How interesting! It's amazing how much history can get lost in just a little over a hundred years. Very cool to read about it. Thanks for the post!

This woman did an unusual and interesting job with this strange little cemetery, just to keep memories alive.
Just in these days in my family happens that we can't remember the correct address of the house where most of us was born!

Kudos to Renee! I have read about people who make a hobby of locating and recording info from old cemeteries.

I'll bet you thought this was strange when you first read it...I wonder why some of the bodies were removed by the families?

Methinks there might be more to this story buried in some archive somewhere.

I really like older cemetaries and have pictures of the many in this area and Skagit Valley. How wonderful of Renee to document this strange cemetary. I am glad it has been preserved though. MB

We have at least one cemetery here similar to this. I would imagine there are a few more. Excellent find & post. We certainly appreciate the research too.

It's all been said already, that's the problem with commenting after all the other, faster bloggers! I too love graveyards and love this post.

It's my understanding that the bodies were removed, and usage of the cemetery stopped, due to concerns about that part of the hill sliding. Wouldn't want caskets cascading down a mudslide into town.

From what I have read there were records of at least 498 people buried there. Renee did a great job of documenting the 80 she found there on Findagrave.com. However, if these were PIONEERS to the area, where are the records of the other 410 or so?? Oregon State Archives has not made them known, I wonder if there are none in existence?? To quote a blogger:
"Over the years, Astoria grew into a prominent port city, attracting a new wave of settlers from Norway, Sweden, Finland, England, China, Ireland, and Germany. It was incorporated in 1876. The Pioneer Cemetery was deeded to the city by a man named James Welch on April 22, 1865. It became the most popular burial site in town, boasting 498 burials by 1891. Prominent early leaders were buried here, as were paupers who were interred in unmarked graves."
From the Astoria Parks and Recreation site:
Astoria Pioneer Cemetery was deeded by James Welch to Astoria on April 22, 1865. By 1891, 498 burials were recorded. There were also numerous unlisted interments. Bodies from abandoned cemeteries were brought here. Many graves and markers were later removed by the families. Use of the cemeteries was discontinued around 1900.

So they didn't remove bodies from here, they brought bodies from abandoned cemeteries to this cemetery.

My ancestors were early pioneers with significant historical stories that settled in Astoria.
My 3rd great aunt was Harriet Sanborn Kimball Jewett who survived the Whitman Massacre along with her children. Her husband Nathan Kimball was killed in the massacre and is buried at the mission. They were rescued by Peter Ogden Skene of the Hudson Bay Company. She remarried John Haynes Jewett in Linn, Oregon. He was a very prominent man in Astoria, and Harriet very well known. He died in 1880 and must have been buried here. She died in 1892 and is likely buried with him as she did not remarry. I am unable to find burial records on either. I would sure like to know if any exist for this cemetery. If you happen to find any please email me @ elizabeth.odel@gmail.com